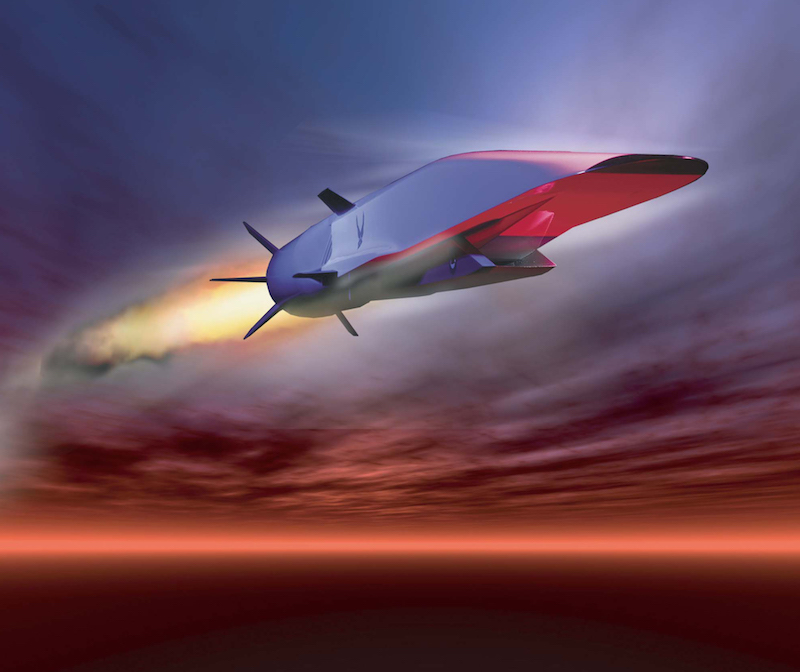 Visualize yourself doing what is normally expected of you on a Tuesday morning in North America. Your phone rings. A news notification warns all citizens to seek shelter somewhere underground, away from windows and exposures to outside areas: an incoming nuclear missile is expected to strike within a matter of minutes.

In a war involving hypersonic nuclear missiles, this person would be fortunate for receiving an advance warning, if only a few minutes of. Such a scenario still remains more of a theoretical possibility than a realistic one, but recent developments signal the imminent confluence of possibility and reality. Hypersonic flight is considered to be flight through the atmosphere at speeds exceeding Mach 5, or 5 times the speed of sound. Conventional re-entry vehicles (RVs) are capable of supersonic flight between Mach 1 and Mach 4. Today, America, Russia, and China are the three countries actively pursuing the testing and development of hypersonic scramjet technology. China is in the process of developing its DF-ZX missile which has most recently been tested last May for the fourth time. This July, Russia, through Sputnik, announced that it had successfully tested its Zircon missile, which is conceptually capable of reaching speeds of Mach 6, and is expected to service the missile by 2020. Western sanctions have so far not stymied Russia’s multiple explorations into hypersonic flight. Abiding by this schedule might propel Russia ahead of even the United States in the field of hypersonic technology.

For over 8 years America has on its own and in cooperation with Australia worked on the science behind hypersonic flight and its various applications through the Hypersonic International Flight Research Experimentation (HiFIRE) program. The HiFIRE program recently concluded a series of tests, including test launches, and was congratulated by the Australian Defence Minister on “another successful hypersonic flight”. Specific details of the program are few and sporadically publicized but a warhead launched by a Terrier Orion rocket under the HiFIRE program has achieved speeds of Mach 7.5. Previous (known) test failures have resulted from the scramjet engine’s oxygen intake mechanism malfunctioning, which prevents the missile from maintaining hypersonic speeds. Despite only three countries working on hypersonic flight, HiFire recognizes itself as only one of the most advanced hypersonic programs in the world. One lesson from the Cold War is that the most effective means of deterring Russia, this time in possession of hypersonic technology, from nuclear blackmail is to demonstrate America’s, and NATO’s, own ability to respond with a degree of force commensurate with or in excess of what an aggressor could rationally threaten.

One reason only three major powers, each occupying a permanent seat at the U.N. Security Council, have developed and successfully sustained a hypersonic technology program is because hypersonic technology represents the next quantum leap in nuclear warfare. Hypersonic flight has theoretically been conceived of many decades ago but only recently have some scientists broken the technological barriers necessary to achieve hypersonic capabilities by, for example, enabling gliders and air breathing vehicles to fly at speeds greater than Mach 5.

Today, conventional ICMBs can strike a target over 6000 miles away within an estimated 30-35 minutes at supersonic speeds (Mach 1-5) (making for about 3 miles a second). A hypersonic missile delivering nuclear warheads would fly three times faster, covering a mile a second. The key towards propelling a missile to hypersonic speeds lies with the rocket motor’s air-breathing engine known as the Supersonic Combustion Ramjet (scramjet) engine.

Scramjet engines have been designed to intake oxygen needed for the engine from air that passes through the vehicle which eliminates the need of carrying an oxygen tank. Doing so allows hypersonic weapons to exceed speeds of Mach 5 by maintaining the thrust of the rocket. The rocket itself requires a separate booster to initially propel to hypersonic speeds at which point the scramjet engine sustains hypersonic flight. Such speed can exponentially increase the range of a missile. Compounding difficulties to track, target, and strike such an object is the ability of hypersonic missiles to maneuver in flight, potentially hindering ballistic missile defence (BMD) radar systems and interceptors from performing their task.

Consequently, a common design for hypersonic missiles involves three separate components: a rocket motor, a booster, and the missile warhead itself. Each of these has its own set of subcomponents which adds tremendous complexity to hypersonic flight but these three general components combine to glide atop the atmosphere [normally below 85 km] at speeds exceeding Mach 5. Conventional ICBMs commonly reach hypersonic speeds for a period during their flight, but are fired at a trajectory that prevents the accumulation of necessary speed and friction to resist the atmospheric pressure which would destroy any ICBM should it attempt to maneuver at a height and speed of a hypersonic missile.

Hypersonic missiles have been specifically designed to ensure survivability against ballistic missile defence systems (BMDS). Russia’s Zircon anti-ship missile, to be deployed in under 2 years, can effectively reduce the US Navy’s response time to under 5 minutes. Ships relying on land based radar systems like Aegis Ashore will have only minutes, if not seconds, to react. Even US Arleigh Burke class destroyers which are equipped with an onboard Aegis Combat System may possibly be unable to detect missiles such as Zircon because the height at which they travel evades the traditional range of Navy radars.

The offensive diversity provided by hypersonic technology permits its incorporation into a variety of strategic concepts, making it a likely source of destabilization. One potential predicament is that an adversary possesses no viable means of determining whether an incoming hypersonic craft is equipped with nuclear weapons or not. The engine motor, key for propelling a missile to hypersonic speeds, can carry both conventional and nuclear warheads. This theoretically enables them to be used in a counterforce strike and an enemy might easily mistake them to be a ballistic missile and retaliate accordingly without waiting for confirmation, at which point it may be too late. In the absence of a fully mature technology and declaratory policies, despite the particular purpose a state intends to deploy a hypersonic craft for, in crisis scenarios, a state is unlikely to afford its adversary the benefit of doubt.  China and Russia seek to apply hypersonic technology to both nuclear and conventional capabilities whereas the US is likely to limit its application to conventional capabilities, as suggested by its concept of Prompt Global Strike.

Amongst the most significant consequences of hypersonic missiles are the dangers it poses for global strategic stability. In June 2016, the Russian and Chinese presidents issued a joint statement on the need to strengthen the global strategic stability America had impaired by proliferating its BMDS. Privately, consternations will further be exacerbated since the 2017 US National Defense Authorization Act mandated the Pentagon with developing a global BMD system. Both Russia and China’s perception of the global strategic stability is affected by their calculation of America launching a massive counter-force first strike which leaves intact only a fraction of Russia or China’s arsenal (a particular concern of China’s, given its small arsenal). The remaining fraction of missiles would have a higher percentage of vulnerability against existing US BMDS and if American BMD systems further proliferate globally, so will concerns about expediting efforts to develop hypersonic technology. Adversaries perceive this as a limitation to their nuclear deterrence and could easily be incentivized to engage in pre-emptive strikes, particularly if they possess hypersonic technology prior to a NATO member.

Hypersonic missiles are therefore conceived as the optimal countermeasure by adversaries seeking to overcome American BMDs. This makes it extremely important that America not forsake its pursuit of hypersonic technology and risk straggling behind adversaries in a technology that has the potential to spur a 21st century arms race between three great powers.

Photo: US Airforce Graphic of Boeing’s X-51A Waverider, powered by a scramjet engine, set to demonstrate hypersonic flight. Courtesy of US Airforce.