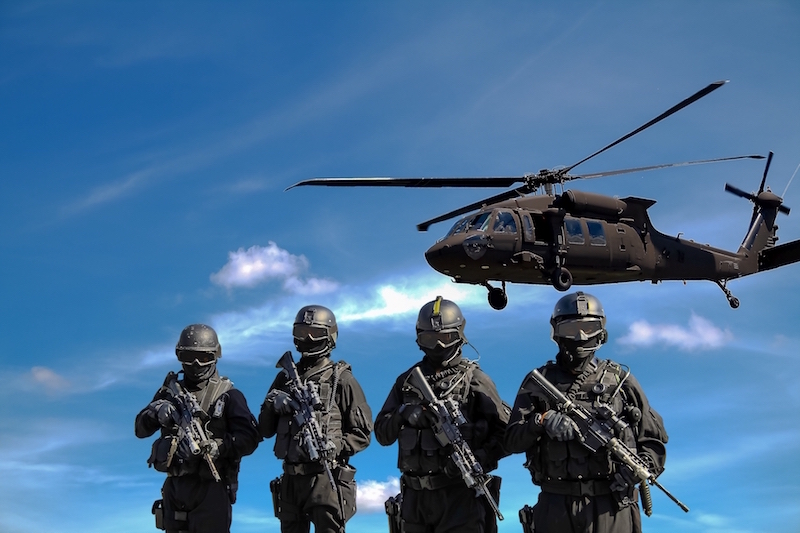 Member States that are part of both the G7 and NATO – namely the US, UK, Italy, France, Germany and Canada – share their military capabilities, including amphibious operations. These operations are crucial to offensive military assaults, and bring together air, army and navy branches of the armed forces to fight in a range of different hostile territories, beaches, mountains or defensive fortifications.

The G7-NATO member countries have a highly specialized, efficient, and skilled division within their militaries designed for such an offensive operation, known as the Marines. This special force are often deployed overseas, to conduct training exercises with partner countries, or during military offensives. In Afghanistan for instance, NATO established the International Security Assistance Force (ISAF), where in most cases, it was the Marines and other elite forces that were sent (PDF file) to tackle al-Qaeda and the Taliban. More recently, a small contingent force of approximately 400 US Marines, alongside other special forces, are being deployed in Syria to combat ISIS.

Canada does not have a similar amphibious force, but has sent experienced soldiers from its regular and reserve forces to Afghanistan and recently, with Operation IMPACT, against ISIS in Syria. However, over the past year, Canada has amended its priorities in the fight against ISIS, including withdrawing the six CFA18 aircrafts from the Syrian conflict. As a direct result, Canada was not invited to attend the anti-ISIS meeting (Paris, 2016) and former US Secretary of Defense Asthon Carter announced that the meeting was for the six nations which played a significant role in the battles against ISIS. Government opposition leaders, academic and previous CAF personnel have criticized the changed nature of Operation IMPACT, arguing the possible negative effect on Canada’s foreign policy, and the perception of being a less powerful political partner.

Canada is now engaged in training-support operations, increasing ground personnel to 600 and special forces to 69 soldiers; many deployed to Northern Iraq to support Kurdish Peshmerga with their battles against ISIS.  Even though CAF forces will still be very close to the line of fire, this type of training and support to local forces could have considerable advantages, including building trust with communities, and as a result could make Canadians both at home and abroad less of a target by Islamic extremists.

The disengagement from the conflict allows Canada an opportunity to strengthen the scope and potential of its military, including as suggested by Griffiths and Hansen, the development of a Canadian Marine Brigade (CMB). Canada has all the opportunities available to establish a small and specialized amphibious force. The CMB would hold the exact entitlements as other branches in the CAF, healthcare guarantees, higher education, competitive pay for NCOs and officers. Their expertise would be focused on guarding Canada’s national interests and borders, in addition to being engaged overseas. The US Marine Core Base Quantico, where decades of expertise, training and equipment could be potentially made available advice and train for a CMB force.

Deploying such a specialized force in support of operations conducted by NATO, by not only continuing to train local forces in advanced and modern tactics, but also engaging with them in the field, could give Canada greater clout during post-conflict negotiations.  In addition, the CMB can be the clear connecting muscle to current branches of the CAF would strengthen the capabilities of the CAF.

Canada’s First Defense Strategy in 2008, revealed the missing component in its army, as Hartwick highlights. Among the core missions established for the CAF, one clearly states the ability to respond quickly and efficiently against major terrorist attacks, whether domestic or abroad, which threaten the security and interests of Canada. Although Canada is prepared in many ways to protect its sovereignty and citizens, the lack of an amphibious force to respond overseas or within Canada is a vital setback. Protecting our allies and other nations is a shared responsibility, highlighted by MPs, and Canada should consider expanding its military with the establishment of a CMB to fully be part of all NATO’s missions globally, including the ones which require amphibious forces. Although this is a hypothetical idea, and yet to be realized, there are clear advantages to the creation of a CMB, offering the potential of becoming a stronger military partner of NATO-G7.