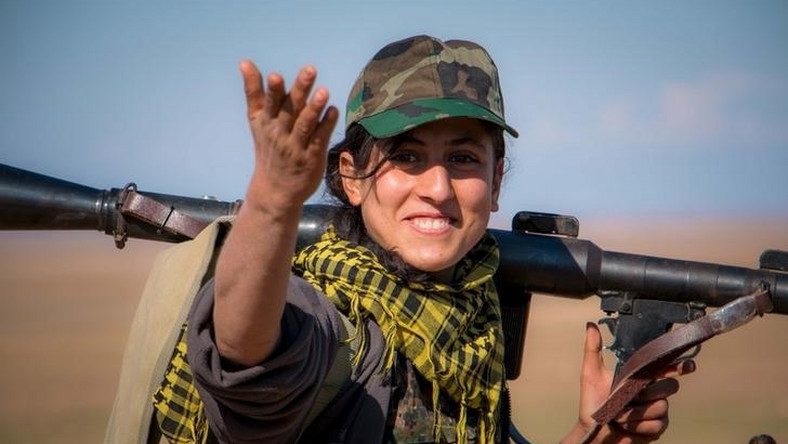 An American citizen and former college student, Hoda Muthana, left the US four years ago to join ISIS. She is currently being held in a refugee camp in northeastern Syria. President Donald Trump has tweeted that he had directed Mike Pompeo “not to allow Hoda Muthana back into the Country!” Hoda Muthana’s story is not unique – it reflects a widespread issue around the world, as democratic nations try to figure out how to deal with hundreds  of returning ISIS fighters.

Kimberly Gwen Polman, born in Hamilton, Ontario, is a dual Canadian–US national who converted to Islam and left the US in 2015 to join ISIS, only to try unsuccessfully to escape from ISIS nearly a year later. After her attempted defection, she was jailed, raped and forced to sign a document admitting that if she were to attempt escape again, her punishment would be death. Polman is known to suffer from post-traumatic stress disorder. Canada’s Public Safety Minister Ralph Goodale speaking on the issue stated that, “It should be noted that while every Canadian citizen, no matter how reprehensible, has the legal right to re-enter Canada, the government of Canada has no legal obligation to facilitate their return…”

Another ISIS recruit, the British citizen Shemima Begum, left her country four years ago when she was 15 years old, and was spotted last month at a Syrian refugee camp, heavily pregnant. Popularly known as “Bethnal Green Trio”, Amira Abase, Shamima Begum and Kadiza Sultana, are three British women who previously attended the Bethnal Green Academy in London before leaving home to join ISIS. According to a report published by the Institute for Strategic Dialogue, they were amongst an estimated 550 female fighters from Western countries who had travelled to join ISIS, part of what some have referred as “a jihadi, girl-power subculture”. Begum, nevertheless, was a child when she left the UK and is now a mother to a newborn baby boy. The UK government reacted quickly, announcing its intention to remove the citizenship of Begum, thereby denying her the right to return home and potentially rendering her stateless.

As the Syrian Democratic Forces’ contingent groups, the YPG, helped secure the last remaining strongholds of ISIS, they have taken custody of almost 3,000 men, women, and children from over 40 countries. This situation suddenly exposes a new phase in the threat posed by ISIS. The greatest challenge these countries face today is what to do with these former members of ISIS and their families.

The similarities of all these cases are that while the former members of ISIS express their need to come home, their governments, on the other hand, are not ready to bring them home. The reasoning behind the decision of these countries not to repatriate former members of ISIS is that the returning individuals could pose a security threat, given their prior membership in a notorious terrorist organization. There is also the question of whether returning militants will face meaningful justice for their wrongdoings.

While these governments could be said to be approaching this issue realistically, denying the return of these former militants may not be the best method for ensuring deradicalization. The United Kingdom, France and Canada, for instance, are currently home to many former members of terrorist organizations, including al Qaeda, Taliban, Hezbollah, Babar Khalsa, Irish Republican Army, and the Tamil Tigers. Many of these former militants have been ready to reform themselves and accept the rule of law in the host countries, and as a result, some have been granted asylum and eventually citizenship. A living example is this writer himself.

Kagusthan Ariaratnam is a former child soldier of the Liberation Tigers of Tamil Eelam, better known as the “Tamil Tigers”. In June 1991, Kagusthan was abducted from high school and forcibly recruited by the Tamil Tigers’ notorious intelligence wing. After more than four years of nightmares and a horrendous experience with one of the world most ruthless terrorist organizations, Kagusthan eventually defected to the Sri Lankan government security forces in June 1995. Working with the Sri Lankan state intelligence services, Kagusthan played a significant role in militarily obliterating the Tamil Tigers in May 2009. After finding refuge in Canada, Kagusthan reformed himself and eventually became a Canadian citizen.

There were also other previous relevant examples, such as Maajid Usman Nawaz, who was born in Southend-on-Sea, Essex to a British Pakistani family. Nawaz is a formerly radicalized previous member of the Islamist group Hizb ut-Tahrir. This association led to his arrest in Egypt in December 2001, where he remained imprisoned until 2006. Reading books on human rights and interacting with Amnesty International, which adopted him as a prisoner of conscience, resulted in a change of heart. Nawaz left Hizb-ut-Tahrir in 2007, renounced his Islamist past, and called for a “secular Islam”. After his turnaround, Nawaz co-founded Quilliam with former Islamists, including Ed Husain.

Ed Husain was born and brought up in the East End of London, in a Muslim family. Husain later drifted away from his parents’ teachings, and, at the age of sixteen, was encouraged by a friend to attend classes at the East London Mosque. He later joined the Young Muslim Organization (YMO), part of the Islamic Forum Europe. This organization was highly influenced by the writings of Sayyid Qutb, a radical member of the Muslim Brotherhood. Unconvinced by the YMO response to the Bosnian genocide, Husain joined the British faction of Hizb ut-Tahrir, an Islamist group which called for a Caliphate, in whose activities he participated for around five years.

It was during his studies at Newham College in 1995 that he decided to leave the group, after witnessing the stabbing of a Christian student. Later he joined the Islamic Society of Britain and was influenced by the spiritual side of Islam and later by scholars who helped convince him to leave the Islamist groups. Husain now strongly criticizes these groups and their politicized and fundamentalist interpretations of Islam. He is currently a writer, senior fellow at the British think tank Civitas, and a global fellow of the Wilson Center’s Middle East program.

Another example here in Canada is Mubin Shaikh, who was born at St. Michael’s Hospital in Toronto. He attended Quran school as a child as well as public school at age 14. Shaikh then joined the Royal Canadian Army Cadets attaining the rank of Cadet Warrant Officer. An acute identity crisis because of a house party led him to Pakistan, where a chance encounter with the Taliban would propel him into extremism. The 9/11 attacks made him reconsider his views and he then spent 2 years in Syria augmenting previous private study of Islamic Studies where he would go through a period of full deradicalization, rejecting extremism and terrorism as an anathema to Islam.

He then returned to Canada and became a Canadian Security Intelligence Service (CSIS) and Royal Canadian Mounted Police (RCMP) undercover operative who helped to take down the Toronto 18 terrorist group. Shaikh’s operational experience originates with his role as an undercover counter-terrorism operative for CSIS in the 2006 Toronto terrorism case. Shaikh moved on to become a RCMP agent with the Integrated National Security Enforcement Teams when one of the Service investigations uncovered a group of young Muslim men, of various ethnic backgrounds, intending to engage in criminal offences regarding terrorism.  Shaikh is now an expert with experience in radicalization, deradicalization, countering violent extremism, and national security and counter-terrorism.

These various stories indicate that radicalization is not a one-way street. If we could create opportunities for deradicalizing these former militants, there is potential for them to be reformed and reintegrated into democratic societies.

As we seek a realistic solution, it is important that we identify what made these youth join these extremist organizations in the first place. What makes a person a terrorist and what, in turn, finally brings them back to their community? The average age of terrorists is 21 years, with many much younger, due to the fact that many terrorist groups kidnap, indoctrinate, and radicalize children from a young age.

Instead of abandoning these youth, we should first and foremost prioritize the prevention of future radicalization by working to transform refugee camps and detention centers in Iraq, Syria and Turkey into rehabilitation centers. Unlike the controversial Guantanamo Bay military detention centers, which are run by military personnel, the new rehabilitation centers should be administrated by civil society groups that consist of educators, social workers, youth workers, health professionals, psychologists, and religious leaders. Ultimately, governments and their citizens need to recognize that long-term solutions are the only way of creating lasting peace.

Featured Image: A Kurdish YPG fighter with her weapon near the al-Hawl area, the site of fighting between ISIS militants and Syrian Democratic Forces. Via Business Insider by Pulse.