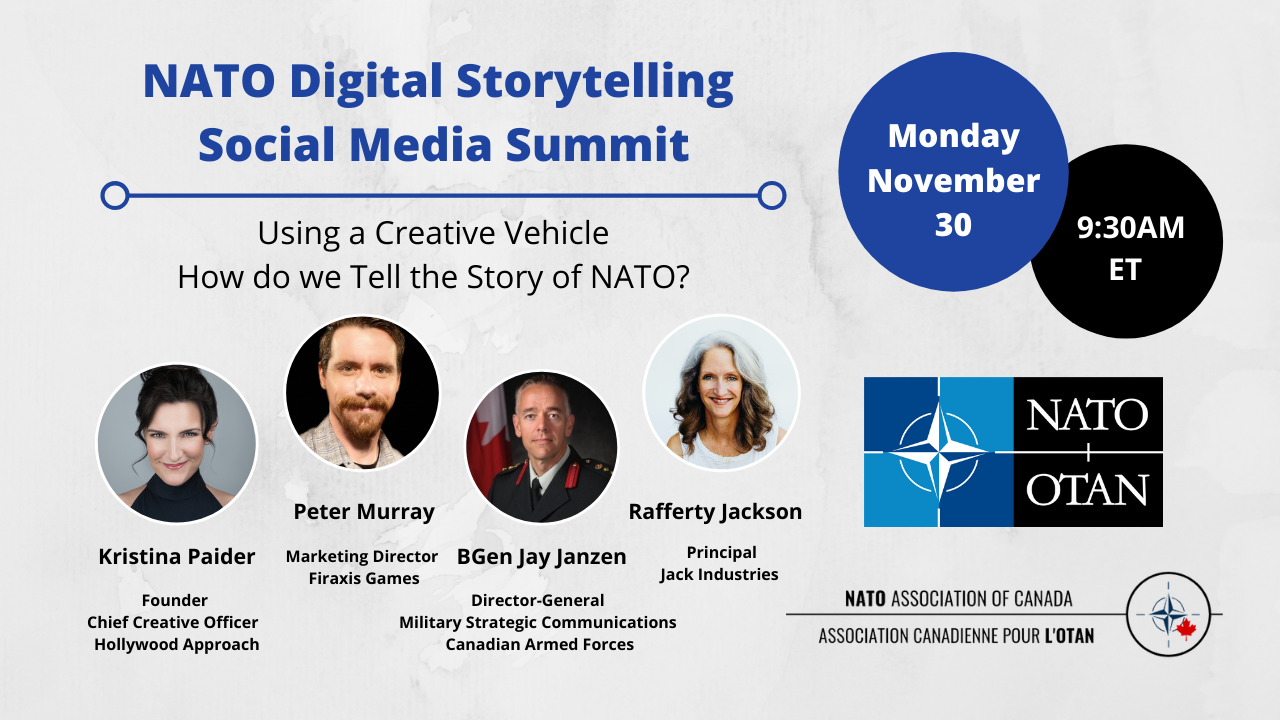 On November 30, 2020, the NATO Association of Canada hosted a social media summit, with the support of NATO HQ, examining how digital storytelling can be used to explain the value of NATO and the rules based international order via YouTube.

The Social Media Summit brought together attendees from different skill sets: practitioners and policy experts of defence and security; artists, storytellers and digital creatives; and branding experts, marketers and communicators.

The Seminar ‘Using a creative vehicle: How do we Tell the Story?’ hosted BGen Jay Janzen, Peter Murray, Kristina Paider, and Rafferty Jackson. It looked at different mediums of storytelling from Hollywood, videogames, the arts, etc.

Following the seminar, a workshop was organized where attendees from the audience were invited to provide their own input/opinions on topics discussed within the seminar.

The NATO Association of Canada will also be hosting a second panel on this summit in the near future ; ‘What are we saying? A message of peace, prosperity & security.’ This panel will feature Dr. Margaret MacMillan and the NATO Deputy Secretary General Mircea Geoană.

Learn about the speakers:

Brigadier-General Janzen served as an armoured officer for the first decade of his career, and subsequently spent the last 22 years working in military strategic communication. His deployments include Bosnia in 1994, and two tours in Afghanistan (2003/2004 and 2008/2009). From 2012-2015 he was the Chief of Media Operations for Supreme Headquarters Allied Powers Europe. He was awarded the NATO Meritorious Service Medal for his role as a leading communications strategist during the Russia-Ukraine crisis. He is a graduate of Royal Roads Military College, the NATO Defence College, and the National Security Program. BGen Janzen spent the past two years building strategic communication capability for the Canadian Armed Forces and is now Director General Public Affairs.

Mr. Murray is the Marketing Director at Firaxis Games, the studio founded by legendary game designer Sid Meier. In addition to developing public relations campaigns, promotional events, and fan outreach, Mr. Murray has served on the development teams for two of the studio’s flagship projects as a writer and associate producer, including serving as the writer on Sid Meier’s Civilization VI expansion packs. He is an alumnus of the University of Maryland and Indiana University Bloomington.

From the Beats by Dr. Dre brand sale to Apple Inc. for $3B (including Beats Music), to The North Face and Vans brands reaching over $1B in sales in North America, to taking Ubiquity Software public on the Alternative Investment Market on the London Stock Exchange and selling it to Avaya, Inc., Rafferty Jackson has led companies through hyper-growth, investments, global expansion, mergers, acquisitions and IPO. She built her diverse career through leadership roles at these major market disruptors, repeatedly creating executive leadership roles requiring oversight, accountability, strategic planning and execution as well as collaboration across all company functions. Now at Jack Industries, she focuses on using her unique and valuable business insights, created from all of her life and business experiences, to fill leaders and founders with courage, new tools and a strategy forward for them to story tell and transform company purpose into company culture, creating better businesses through better jobs, products and services. She is also an Astia Angel investing in women-led, founded and invented companies and a mentor at Seraphim Capital’s SpaceTech Accelerator Programme in London. Rafferty has a special passion for the New Space industry and works with technical founders to story tell their technical visions to non-technical audiences.

Kristina Paider – “KP” – is a world-class business strategist and screenwriter. Her company, The Hollywood Approach, is a platform that leverages the art and neuroscience of story to help people accelerate results in their business and life.KP’s executive track record includes overseeing the marketing and research for a $10 billion global hotel advisory company and prior to that, two hotel tech companies, all while moonlighting as a screenwriter. Her action-thriller script sold this summer. Her book comes out in February.She travels by motorcycle, jumps into waterfalls and is a guest chocolate chef who says that business is the most dynamic medium there is for story.