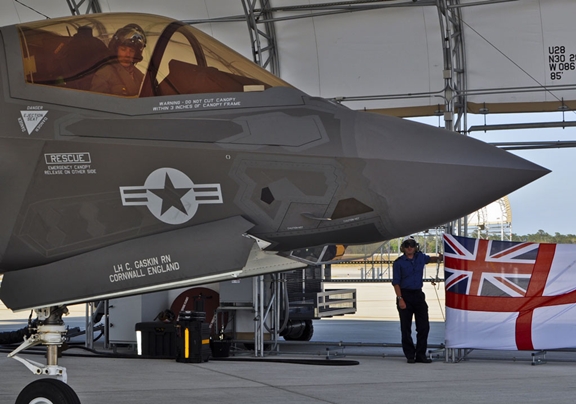 A few weeks before what was to be the Lockheed Martin F-35 Lightning II’s (or Joint Strike Fighter (JSF), as it’s known in the UK) maiden international flight, at Farnborough Air Show between 18-20 July, US military officials grounded the entire fleet. A mechanical fault caused an F-35’s engine to burst into flames at take-off on a training flight in Florida. While officials have cleared the F-35 for limited flights after ensuring they would pose no risk to the safety of pilots, the “fifth generation” did not ultimately appear in the air show.

This is not the first time the F-35 caused embarrassment and consternation among defence officials.  While the struggles of the US military’s most expensive project are of greatest concern to the US, the problem goes beyond that, as the F-35 is also set to be the main fighter jet of a number of NATO nations.

…this attempt to have the F-35 replace over a dozen aircraft, all with different capabilities, left it in danger of being a jack of all trades, but a master of none.

Though there are significant differences between the three variants of the Joint Strike Fighter, the distinguishing feature of the project is that they are all based around a common design. To save costs, the Pentagon sought a fighter jet that could be used with a minimum of modifications by the Army, the Navy, and the Air Force. Of particular interest was ensuring the jet had a so-called “jump” capability, the short-take-off and vertical landing (STOVL) used by the Marine Corps. However, this attempt to have the F-35 replace over a dozen aircraft, all with different capabilities, left it in danger of being a jack of all trades, but a master of none.

Defenders of the F-35 have pointed to its highly advanced sensor and software capabilities, which, it is argued, allow fighter pilots to share information and targets with other jets, as well as with surface ships such as the Aegis cruiser. The US government has many international partners in the F-35 programme, and allied nations including Japan and Australia plan to operate it, suggesting potential for unprecedented levels of inter-service, international cooperation in the Pacific.

On January 17, 2001, the British and American governments signed a Memorandum of Understanding agreeing to cooperate on the development and operation of the Joint Strike Fighter project. This arrangement gave the UK a degree of influence and participation in the project, though the US clearly remained in control. For a long time, the British government’s efforts to gain access to technology and software crucial to being able to operate and maintain the plane were thwarted by US lawmakers concerned about secrecy. Though a waiver from the International Traffic in Arms Regulations was eventually granted in 2006, the five-year struggle emphasized the UK’s second-tier role in the development – threats to pull out of the project were made but London did not follow through, suggesting the British government is committed to the JSF, for better or worse.

The UK had originally planned to order 138 of the F-35B Short Take-Off and Vertical Landing variant to fly from its planned Queen Elizabeth carriers. In the 2010 Strategic Defence and Security Review, the coalition government announced they had changed the order to a smaller number of the F-35C, the carrier variant of the jet. This decision would have meant modifying the aircraft carriers with the catapult and arrestor system required for jets to take-off and land on their decks. However, as the projected budget and time overruns of this modification grew, the decision was taken to abandon it. After two years, and millions of pounds spent, the British government confirmed it would again be ordering the F-35B, a decision that was sharply criticized for suggesting a lack of clarity in decision-making and for leaving the UK with a “sub-optimal capability” with less flexibility and long-term growth potential.

With the continuing murmur of misgivings about the wisdom of putting billions of dollars worth of eggs in one basket across the Atlantic, it is fair to question the wisdom of Britain’s commitment to the F-35. Indeed, even the government appears to have hedged its bets slightly as it has only committed to purchasing fourteen aircraft in addition to the four training aircraft it already owns. Former defence secretary Philip Hammond pointed out it was impossible to tell how many fighters the UK would ultimately need, which suggests the British government may be nervous about the Joint Strike Fighter programme too.

Nevertheless, the F-35 is not likely to be cancelled by the Americans or the British government, for one key reason: jobs. The manufacturers, Lockheed Martin, have subcontractors across the United States, supporting some 133,000 jobs in the districts of many congressmen, which gives it strong political protection despite its technical and strategic flaws. Similarly, the UK’s status as a first-tier participant in the programme requires that fifteen-percent of each aircraft is made in Britain, supporting some 25,000 jobs.

Furthermore, the alternatives aren’t promising. Even the F-35’s critics acknowledge the programme’s “formidable defences,” partly because it isn’t clear whether there is a viable replacement. Some have suggested continuing to produce older fighter jets that have already been proven to work, but this seems to be kicking the can down the road. Older fighters might be able to be upgraded to provide similar capabilities to the F-35 in the near-term, but it is unlikely the UK would be able to rely on them for as long as it would the F-35. In any case, since the catapult-less Queen Elizabeth aircraft carriers will only be able to launch STOVL jets, and since the Harrier has been scrapped, there is literally no carrier-capable alternative to the F-35B.

All British pilots can do is hope the Joint Strike Fighter won’t make a habit of bursting into flames at inopportune moments.

Gabriel Mallows is a graduate of University College London, specializing in International Relations and Development. His research interests include security and defense policy in Europe and Brazil, the arms trade, and ‘humanitarian’ interventions. Contact: gabriel.mallows.11@ucl.ac.uk View all posts by Gabriel Mallows →