A slowly expanding shipbuilding program is no evidence of greater interest in the navy by the Russian government, and Russian interest in overseas bases does not mean significant changes in the international environment. If Russia does obtain more overseas bases, it will not result in a sustained global presence in the near future. 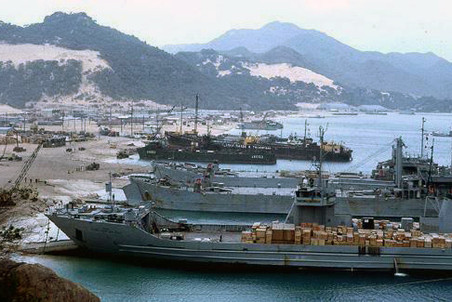 Russia ships unload at the Syrian port of Tartus

Throughout the ongoing Syrian crisis, Russia has stuck by the Assad regime and repeatedly stressed its desire to retain its access to the Syrian port of Tartus. Russia claims the base is needed for training and maintenance for routine counter-piracy patrols. The base also gives Russia a bit claim to the position of global influence the Soviet Union once possessed. Additionally, it may serve as a reminder of Russian influence in the Middle East or provide an added layer of defence for Russia’s Black Sea coast. Just this week, the Russian government announced its renewed intentions to keep Tartus in conjunction with the desire to open new naval facilities in Cuba, Vietnam, and Seychelles. It would appear to demonstrate a new desire by the Russians to project naval power around the world. But does this presage a global focus for the Russian Navy? The answer: not likely.

There are a number of reasons why the Russian Navy could not develop a global posture, even with access to new overseas facilities. The first is cost. Long-distance deployments are costly in fuel and maintenance expenditures. This is particularly problematic given instability in the Russian state budget. The budget is heavily dependent on high oil and gas prices – up to one third of government funds come from hydrocarbon revenues – meaning Russian military activity is beholden to global petroleum prices. This has serious implications for Russia’s military modernization, a key component of its current national security strategy.

In fact, an article in RIA Novosti stated that Economic Development Minister Andrei Belousov recently quashed rumours of a three-year delay in Russian rearmament plans. The article noted that the Finance Ministry has been consistently opposed to high levels of defence expenditure because of the strain they put on state finances. Given intra-governmental disagreement over simply recapitalizing and modernizing the ailing military it is unlikely that funding will be available for foreign bases. After all, just in 2002 Russia closed its facility at Cam Ranh, Vietnam due to cost. Expensive global cruises, sustained foreign deployments, and overseas bases are not sustainable for Russia.

The second reason is the Russian Navy’s aging equipment. Most of its ships are ex- Soviet vessels, many over thirty years old. At this stage in their careers, these vessels require lengthy periods of maintenance to remain operational. Unfortunately for the navy, Russia lacks adequate maintenance facilities to keep them fully functional. In 2008 the pride of the Russian fleet, the carrier Admiral Kuznetsov, suffered an electrical fire off Turkey and an oil spill off Ireland, all on the same deployment. If Russia increases the pace and range of its naval deployments, similar incidents will likely occur.

The pride of the Russian fleet, the carrier Admiral Kuznetsov

Furthermore, the Russian Navy suffers safety issues, demonstrated most spectacularly by the Kursk incident in 2000. These would only be exacerbated by an increased deployment schedule, which would mean reduced training for short-service conscript crews and subsequent attendant issues. With aging equipment, inadequate maintenance facilities and poor safety procedures, it would be difficult for Russia to maintain a global posture without seriously degrading its fleet. This brings us to the final point: the Russian Navy cannot handle increased attrition because it has already been severely reduced in size since 1990.

The Russian Navy is just not large enough as it stands to both maintain a global presence and meet its obligations nearer home. In 1990, the Soviet Navy stood at 2,052 vessels. Today its Russian successor stands at 518, of which a maximum of 79 could be considered significant combat assets. It is a shadow of its former Soviet self. On top of this reduction, Russian shipbuilding facilities are woefully inadequate. For example, from 1994 to 2008, only seven ships, all begun during the Soviet era, were completed. RIA Novosti claims that 10 to 15 new ships will be launched this year, but it is likely that at least some of these will be delayed, and none are particularly large or capable ships.

Given its reduced size, the Russian Navy has had to focus on its core responsibilities. Russia’s core national interests include ‘ensuring the solidity of the constitutional system, territorial integrity, and sovereignty of the Russian Federation,’ and the Navy helps achieve these by protecting the Russian coast and defeating terrorists and drug smugglers. Russia has only a handful of major naval assets, barely enough to ensure its most basic national security objectives much less adopt a wider-ranging posture.

If Russia does obtain more overseas bases, and it appears Vietnam will at least allow Russian ships to visit Cam Ranh, the result will not be a sustained global presence in the near future.  In the longer term the Russian Navy may shift its focus, and a slowly expanding shipbuilding program does provide evidence of greater interest in the navy by the Putin government. As it stands, Russian interest in overseas bases is a curiosity, but does not mean significant changes in the international environment.

Ian Sundstrom is currently finishing an MA in War Studies at King’s College London, where he has focused on issues of naval strategy and force structure. He holds a BA in Economics and Political Science from the University of Wisconsin.

theriskyshift.com (‘TRS’) was launched in London in January 2012 by postgraduate students of the Department of War Studies, King’s College London. The site’s aim is to bridge the gap between academia and journalism; to provide the depth and breadth that is often lacking from today’s sound bite media whilst remaining accessible to those who are unfamiliar with academic debate on covered matters. View all posts by TheRiskyShift →