In Afghanistan, as one fight ends another continues. However, the struggle for women’s rights is beginning to look like a losing battle.

On July 10, 2013, Afghanistan will appear before a United Nations committee for a review of its compliance with the Convention on the Elimination of All Forms of Discrimination Against Women (CEDAW). The review comes at a critical moment. In 2001, the U.S. government and its NATO allies launched a military invasion in Afghanistan, justifying its actions as a defense of human rights generallyand women’s rights in particular. Now, as the 2014 end-date of the mission approaches, it seems appropriate to assess whether the involved parties can declare this mission accomplished.

Certain rights and freedoms for women have been gained over the eleven-year operation: girls’ access to education has increased, as has women’s representation in parliament. Moreover, under the new constitution, women and men have equal legal status. However, the UN review is likely to highlight the potentially short-lived and limited nature of these reforms, as well as the ongoing violence against women in the country. While the situation for Afghan women improved following the fall of the Taliban regime in 2001, high levels of violence and poverty, and cultural practices that subjugate women combine to make Afghanistan one of the most dangerous places in the world to be a woman.

Acid attacks, intimidation tactics and death threats against women are all violent realities that make speaking up and changing the status quo incredibly difficult and perilous. For young girls attending school even just entering the institution can make them a target. In 2012, the UN Afghan task force noted 167 attacks on schools, many of which were against girls’ schools. In just the past year, the two leaders of the women’s affairs department in the eastern province of Laghman have been assasinated. In July 2012, Hanifa Safi was killed when a bomb exploded under her car. Safi had received death threats prior to her assassination for helping a young girl escape an arranged marriage. Just six months later her successor Najia Sediqi was gunned down on her way to work.

These incidents illustrate the endurance of a repressive patriarchal society in Afghanistan that manifests itself in the normalization of violence against women. Life after the Taliban, it seems, has improved only marginally. As such, there is little hope that Afghanistan’s July 10 CEDAW review will bring to light many positive developments.

What is even more concerning than the current situation in Afghanistan is the potential for regression in the coming months. In other words, the situation for women in Afghanistan can get worse – much worse – and there are very convincing developments that suggest it might.

Negotiations with the Taliban have many concerned that women’s rights will be compromised in an attempt to gain a ceasefire between the Taliban and the Afghan forces. President Karzai assured Afghans in 2010 that women’s rights would not be sacrificed in any potential reconciliation deal with the Taliban, and U.S. officials have stated that they will not broker a deal that does not protect the rights of women and minorities. However, only nine women have been appointed to the 70-member High Peace Council (the Afghan government’s body charged with leading the peace talks with the Taliban), and even these women are secondary participants in the key negotiations. This has led to concerns that a negotiated peace deal and a speedy U.S. exit from Afghanistan will be prioritized above all else. Women’s rights might be used as a bargaining chip; a means towards an almost antithetical end. As such, Amnesty International’s Polly Truscott recently argued against the silencing of women’s voices in the negotiations: “the inclusion of women in the peace talks must be genuine and meaningful, with their priority concerns fully reflected, in line with UN Security Council Resolutions on Women, Peace and Security.”

Yet, it is not only the prospective return of the Taliban that has Afghan women anxious. Government officials are also currently demonstrating their opposition to women’s participation in political society. The political battle generated by a proposed law, Ending Violence Against Women (EVAW), further demonstrates the vulnerable position of women’s rights in Afghanistan. The law has been in effect since 2009, but only by presidential decree. It is now being brought before the Afghan Parliament in an effort led by women’s right activist and presidential hopeful Fawzia Kofi. In bringing the law to a vote, Kofi hopes to give permanence to the law, fearing that future presidents might be tempted to repeal the law following pressure from staunch religious factions. However, conservative parliamentarians fiercely opposed the law which proposes banning child marriage, criminalizing domestic violence and rape, and banning the practice of ‘baad,’ or the traditional practice of trading women and girls to settle debts and disputes. This opposition is a symptom of a culture that exists not just in the rural regions of the country, but also within the government. 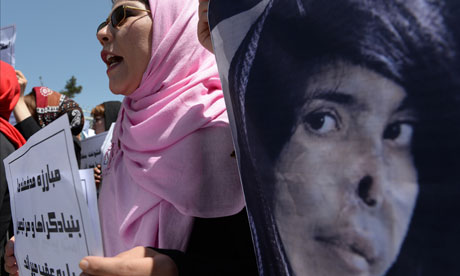 Afghan women demonstrate in front of Parliament in support of the Eliminating Violence Against Women law.

The display of visceral opposition to the law, and attempts to gut the main contributions of the law by the lower parliament, all legitimize Kofi’s fears. Some lawmakers have opposed the legislation on the grounds that it was “un-Islamic.” More than 200 male students echoed the conservative parliamentarians’ sentiments on June 26, 2013, protesting the provisions of the decree in front of Kabul University and calling them imported Western values. Such a stunning display of opposition to establishing a basic legal infrastructure aimed at protecting and empowering women attests to the weak hold that women’s rights have in Afghanistan.

Whether it be Taliban negotiations or domestic anti-feminist militants, the situation for women in Afghanistan suggests that the stakes are high in the coming months. The question faced right now is whether the pursuit of women’s rights will be undermined by the withdrawal of the international community. Some have asked, will security take priority over women’s rights? Mary Akrami, Director of the Aghan Women Skills Development Centre argues that this dichotomy is misleading, stating unequivocally that “there cannot be national security without women’s security: there can be no peace when women’s lives are fraught with violence, when our children can’t go to schools, when we cannot step on the streets for fear of acid attacks.” The current approach to peace in which women’s rights are seen as optionalholds little hope for lasting security. When half of a country’s population is marginalized and such violence remains unaddressed, prospects for an enduring peace are dubious at best.

As the international community gears up for the 2014 end-date of the Afghanistan mission, women’s rights advocates in the country are preparing to battle harder than ever to retain the rights and freedoms earned over the past eleven years. Hopefully, the upcoming UN review can bring the international community’s full attention to the daily violence experienced by women in the country, highlighting the insecure position of women’s rights in the country and as such the dim prospects for a lasting and sustainable security in Afghanistan.