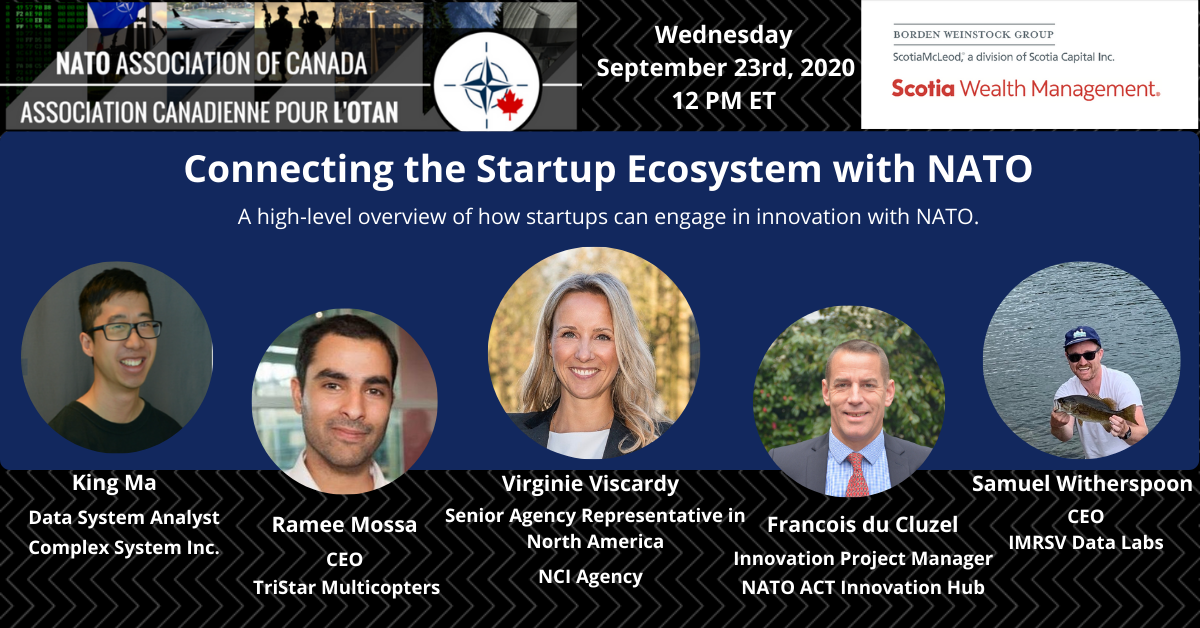 On September 23, 2020, the NATO Association of Canada in partnership with the Defence and Security Labs proudly hosted a webinar primarily but not exclusively aimed at Canadian startups interested in knowing more about open innovation and procurement opportunities within NATO.

As the commercial sector overtakes the traditional defence/security industry in the pace of technological progress, NATO is increasingly resorting to open innovation by harnessing dual-use technologies from startups.

Following pitches by the three finalists and a presentation of the different open innovation and procurement tools wielded by the iHub and NCIA to engage startups, all panelists were invited to exchange takeaways on the best practices regarding national security open innovation which will be of great benefit for Canadian and other entrepreneurs with dual-use solutions looking to enter the evolving defence/security space.

As a drone designer and full-stack web developer, Ramee has designed and developed advanced technology prototypes including several high-performance drones, one of which is patent-pending and constitutes the basis for Tristar’s product. Previous work includes software development, technology advisory roles within MNCs, and public policy advising with municipal governments. Ramee earned his graduate degree in Political Science with honours from the University of London’s School of Oriental and African Studies.

Mr. King Ma works as a system and data analyst for Complex System Inc (CSI) with a background in machine learning and signal processing. He has a Master of Science in Electrical Engineering from the University of Calgary, Canada. His current work in CSI involves the use of integrating artificial intelligence for applications in civil and space/defense. Throughout his work, he has developed programs using software platforms for data applications leveraging Python and various software libraries. He represented CSI as a finalist in the 2020 NATO Innovation Challenge. His recent projects involved research and development in algorithms and system workflows for change and object detection in remote sensing (Optical/SAR) imagery and prediction for empirical and physical modeling of industrial processes.

Mr. Francois du Cluzel is the NATO Innovation Hub manager. After a long experience in the French Army as a light armoured cavalry officer, he was assigned to Supreme Allied Command of Transformation (Norfolk, Virginia) in August 2013, where he contributed to the creation of the Innovation Hub.

In 2016, he retired and became a NATO civilian.

Mrs. Viscardy works for the NATO Communications & Information Agency in Norfolk Virginia, USA, where she is responsible for the development of stakeholder engagement strategies for the North American region as part of the Executive Management’s Strategic Communications and Partnership Office (SCPO).

Her responsibilities focus on strengthening relations and building partnerships with known and new stakeholders (government entities, defense and non-traditional industry, academia, not for profit organizations) to make of the NATO Communications & Information Agency a partner of choice across the Atlantic and gain support for the implementation of NATO’s Digital Endeavour as well as a wide range of innovation efforts.

She also supports the Chief SCPO in translating the General Manager’s Strategic Plan into effective communication and engagement campaigns tailored to the needs, priorities and challenges of both the United States and Canada

Mrs. Viscardy is also a volunteer Gender Focal Point for policy at Headquarters Supreme Allied Command Transformation and a fervent advocate for Diversity and Inclusion within the organization. Virginie Viscardy has over 17 years of NATO experience between assignments in Brussels, Norfolk and Kabul, Afghanistan. Prior to her current position, she acted as Deputy Head of the NATO Strategic Partnership Office where she contributed to the reform of the NATO C3 Agency into the NATO C&I Agency. She started her career in NATO as a liaison officer focusing on the successful development and approval of common funded C4ISR Capability Packages and projects. Virginie deployed to Afghanistan during the summer of 2016 where she contributed to the development of an Advisor Network Tool and worked on various projects with the Resolute Support Gender Advisor. She holds a Bachelor of Arts in Political Science (University of Brussels, Belgium), a Masters of Arts in International and Strategic Studies (University Jean Monet, Paris, France), holds a Certificate of Business Management from the University of William & Mary and is a graduate of the NATO Executive Development Programme.

Jeff Musson is an accomplished entrepreneur with over 10 years experience in achieving corporate goals.  As president of Dynamitenetwork.com, a leading software development company, most recently specializing in the area of connected car technology and artificial intelligence. His team also has gained experience in the area of cyber security and related fields. By leveraging his experience, Jeff has been able to demonstrate a keen ability to affect significant change by simplifying complex challenges and motivating colleagues to meet desired business outcomes.