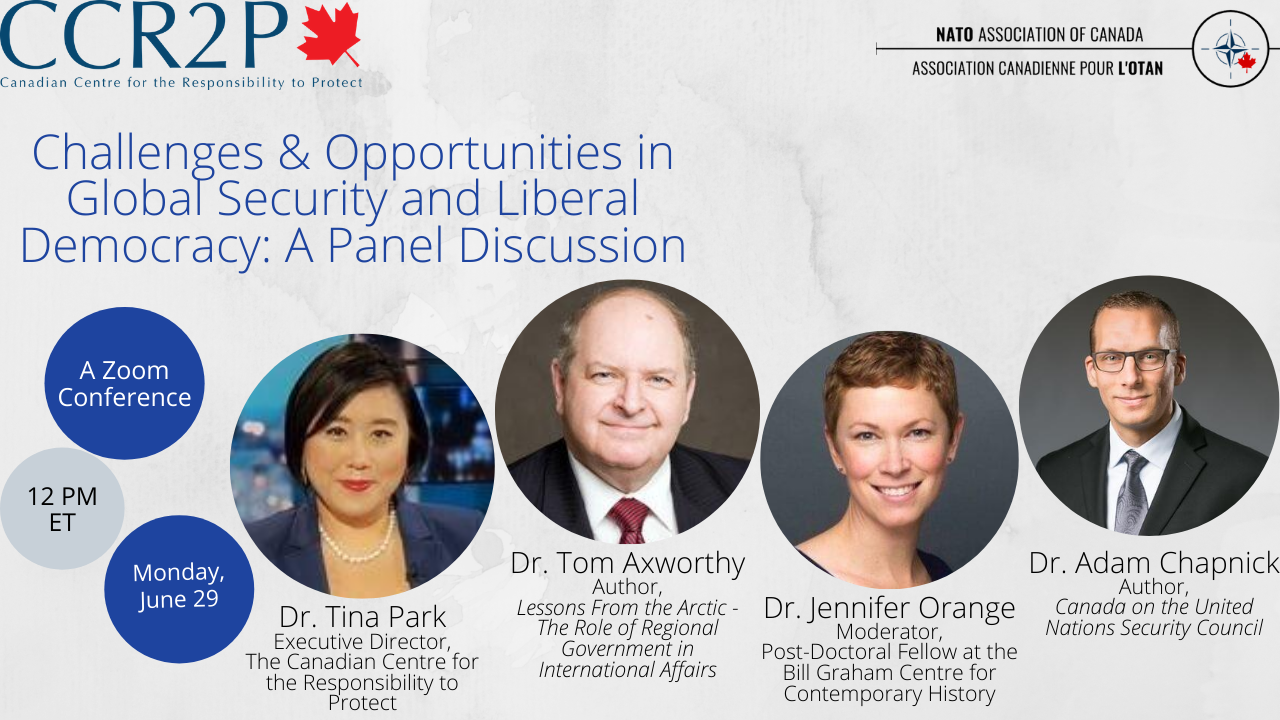 You can find the article here.

You can watch the event here

The NATO Association of Canada is proud to have collaborated with the Canadian Centre for the Responsibility to Protect (CCR2P), a non-profit, non-partisan research and advocacy organization that aims to promote scholarly engagement and political implementation of the R2P principle for a virtual panel discussion on June 29, 2020. This event hosted Dr. Tom Axworthy, who discussed insights from his new book: Lessons From the Arctic – The Role of Regional Government in International Affairs, and Dr. Adam Chapnick, who drew from his own publication: Canada on the United Nations Security Council. The discussion also featured Dr. Tina Park, executive director of the CCR2P and vice-president of the NATO Association of Canada and was moderated by Dr. Jennifer Orange, who is a post-doctoral fellow at the Bill Graham Centre for Contemporary History and member on the advisory board of the CCR2P.

Dr. Tom Axworthy: Thomas S. Axworthy has had a distinguished career in government, academia, and philanthropy. He began his career in public policy in 1967 as a research assistant to the Task Force on the Structure of the Canadian Economy. He served as an assistant to the Minister of Housing and Urban Affairs, then the Minister of National Revenue, before joining the Prime Minister’s office as Senior Policy Advisor, and then Principal Secretary to Prime Minister Pierre Trudeau. He chaired the Arctic Advisory Steering Group of the Walter and Duncan Gordon Foundation, the Renewal Commission of the Liberal Party of Canada, and the Advisory Panel on the Creation of a Canadian Democracy Promotion Agency. He is currently a distinguished senior fellow at the Munk School of Global Affairs and a senior fellow at Massey College and Chair of Public Policy at Massey College. To recognize his achievements, Dr. Axworthy was invested as an Officer of the Order of Canada. He is the author of numerous books and articles of which the best known is Towards a Just Society, co-authored with Pierre Trudeau. He is a regular contributor to the opinion pages of the Toronto Star, the Globe and Mail, and the National Post.

The Arctic region is now a major concern not just for adjacent nation-states but also for many other countries. As the Arctic warms, its oceans and sea lanes are rapidly becoming key and high profile factors in world politics. The powers at large are all jockeying for influence in this region – Russia, China, the United States of America, the Scandinavian countries, and Canada. Many other countries as diverse as Switzerland, Mongolia, and Turkey have sought observer status at the Arctic Council as an expression of their Arctic interests. The polar region and the Arctic agenda is now a vital issue in the shaping of global politics for many nations and it is likely to become more intense in the near future. At the forefront of any decisions made for the Arctic regions are municipalities, territorial and state governments, Indigenous organizations, and governments. While discussions of development and climate change consume the agenda of most competing interests, we must also play close attention to the subnational actors and governments from within the Arctic. International diplomacy may well affect these players very deeply. The Arctic Council is often regarded as the main platform for international Arctic diplomacy. Yet, these subnational players and regional governments remain the vital structural components of the region. Lessons from the Arctic: The Role of Regional Government in International Affairs is a collection of articles written by twenty-six leading and emerging scholars from across the circumpolar region. Each author assesses and explores the processes of regional governance in the Arctic from an interdisciplinary perspective. The topics include Indigenous internationalism, paradiplomacy, federalism, global institution-building, and more.

You can find the book here: http://www.mosaic-press.com/product/lessons-from-the-arctic-the-role-of-regional-government-in-international-affairs/

Dr. Adam Chapnick: Adam Chapnick is a professor of defense studies at the Royal Military College of Canada (RMC). He holds a BA from Trent University, an MA in International Affairs from the Norman Paterson School of International Affairs at Carleton University, and a PhD in History from the University of Toronto. He joined RMC in 2006 and currently teaches courses in Canadian foreign policy and strategic decision-making at the federal level. Outside of the college, he lectures about Canadian politics and international security across the greater Toronto community. He is the author or editor of eight books and over 50 academic essays and book chapters on historical and contemporary issues in Canadian foreign relations, Canadian-American relations, and teaching and learning. He is also a regular commentator in the public realm. His commentaries have also been published in The Globe and Mail, The National Post, Toronto Toronto Star, The Ottawa Citizen, The Calgary Herald, The Conversation Canada, and The Hill Times. He has appeared as a foreign policy expert on Global News, CTV News, CBC News, The Agenda with Steve Paikin, and CBC radio, and has testified as an expert witness before The Standing Senate Committee on National Security and Defence.

Last week, Canada suffered its second consecutive defeat in its effort to seek a seventh term as a non-permanent member of the United Nations Security Council. The loss was greeted with disappointment and incredulity. Was it evidence of a failure of Canadian foreign policy? Hubris among Canada’s political elite? A campaign that simply began too late? Drawing from more than twenty archival libraries and more than eighty interviews with experts and practitioners, Canada on the United Nations Security Council grounds those defeats in their historical context by describing and analyzing Canada’s attempts since 1946, both successful and unsuccessful, to gain a seat as a non-permanent member. It also reveals that while the Canadian commitment to the United Nations itself has always been strong, Ottawa’s attitude towards the Security Council, and to service upon it, has been much less consistent. Nonetheless, the benefits of council membership have consistently equaled or outweighed the costs of participation. Impeccably researched and clearly written, Canada on the United Nations Security Council is the definitive history of the Canadian experience on the world’s most powerful stage.

You can find the book here: https://www.amazon.ca/Canada-United-Nations-Security-Council/dp/0774861614

Dr. Jennifer Orange: Jennifer Orange is a Post-Doctoral Fellow at the Bill Graham Centre for Contemporary International History and sits on the Advisory Board of the Canadian Centre for the Responsibility to Protect. She is a lawyer, adjudicator, mediator and scholar, with expertise in international and domestic human rights law. She is passionate about the potential for partnerships between institutions to work to prevent, and recover from, human rights violations. A former Global Justice Fellow at the Munk School of Global Affairs and Jackman Humanities Institute-Mellon Graduate Fellow, she is currently a member of the Jackman Humanities Institute research communities on Truth and Reconciliation Commissions and Museums and Public History. She has taught Canadian public law at Western Law School and International Human Rights Law and the Law of Armed Conflict at the University of Toronto, Faculty of Law. She has published widely on international law, human rights and cultural institutions. She was a member of the Human Rights Tribunal of Ontario and a litigator at Torys LLP. She is an advocate for the inclusion of the most marginalized voices in decision-making processes and has broad experience in board leadership at mental health and patient organizations.

Dr. Tina Park: Tina J. Park is a Co-Founder & Executive Director of the Canadian Centre for the Responsibility to Protect, based at the Munk School of Global Affairs. The CCR2P is a non-profit, non-partisan research organization aimed at advancing scholarly engagement and political implementation of the R2P principle. Dr. Park has advised over 30 governments and regional organizations on their policies with regards to R2P/human rights, including the Inter-Parliamentary Union and the InterAction Council, and has addressed the UN General Assembly’s annual dialogue on R2P at the UN Headquarters in New York since 2013. She also contributed to the UN Secretary-General Ban Ki Moon’s annual report on R2P since 2012.

R2P & Cyberspace:Sovereignty as a Responsibility

The Responsibility to Protect, commonly referred to as R2P or RtoP, is an emerging norm in international relations which states that when a state or government fails to protect its people from mass atrocity crimes, the international community has the responsibility to do so. First coined in 2001 and later adopted by 150 heads of state and government at the 2005 World Summit, R2P has been hailed as the most important turning point for the notion of ‘sovereignty as responsibility’. Yet, to date, no proper attention has been given to understanding how the technological changes in cyberspace affect the prevention and response to R2P crimes at the national, regional and international levels. This paper explores how evolving cyber capabilities relate to the facilitation, commission and prevention of mass atrocity crimes, specifically war crimes, crimes against humanity, genocide and ethnic cleansing, under the Responsibility to Protect framework in order to (A) demonstrate that such capabilities should be examined and incorporated into the R2P discourse and (B) recommend measures to bolster the efficacy of this incorporation. It begins by discussing the historical significance of R2P, exploring its current conceptual framework and making a case for why prevention efforts deserve consideration. It then proceeds to examine three broad categories in the cyber domain (material sabotage, information collection and social influence) which may be relevant to prevention efforts of R2P. The article concludes with recommendations for more effective integration of cyber capabilities to prevention efforts and ultimately argues that a greater attention must be given to the relationship between R2P and the cyber domain.