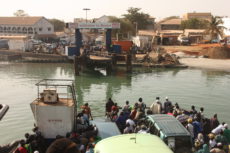 The resolution of The Gambia’s recent electoral crisis is a victory for democratic transitions of power in Africa. It remains to be seen if other countries in the region can replicate its success.