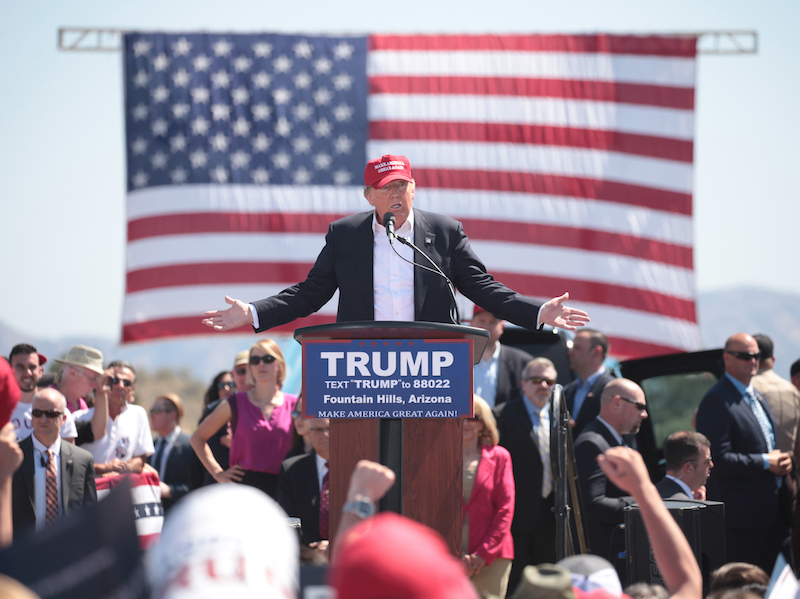 Part Two of this series discussed how Strategic Communication Laboratories (SCL) developed their own predictive personality computer model which was based on research conducted by Michal Kosinski, and later replicated by Aleksandr Kogan. The model was then shown to wealthy conservative investors, and a company called Cambridge Analytica was born. They later had a part to play in the “Leave.EU” campaign, but this was merely the opening act in a drama which would forever alter the course of history.

The stage was set: New York, September 2016. Audience members at the annual Concordia Summit waited patiently for the next presentation to begin.

“It is my privilege to speak to you today about the power of Big Data and psychographics in the electoral process,” said Alexander Nix, CEO of Cambridge Analytica, as he took the stage. The logo of Cambridge Analytica, a group of interconnected network nodes in the shape of a human brain, appeared behind him. He continued, “only 18 months ago, Senator Cruz was one of the less popular candidates… only about 40 percent of the population had heard of him… yet come May 2016, Senator Cruz was the only serious contender against the popular phenomenon: Donald Trump.”

“So how did he do this?” Nix explained that until then, electoral campaigns had been organized based on demographic and geographic concepts. “A really ridiculous idea… that all women should receive the same message because of their gender, or all African Americans because of their race.”

Cambridge Analytica was taking a different approach, one Nix called “psychographics,” because “…it’s personality that drives behaviour, and behaviour that influences how you vote.” Later in the presentation, Nix revealed that Cambridge Analytica had built a personality profile for every adult in the United States of America, and as a result was able to send ads specifically tailored to appeal to the personality of the viewer.

“For example,” Nix wrote in an op-ed last year about Analytica’s work on the Cruz campaign, “our issues model identified that there was a small pocket of voters in Iowa who felt strongly that citizens should be required by law to show photo ID at polling stations.. Leveraging our other data models, we were able to advise the campaign on how to approach this issue with specific individuals based on their unique profiles in order to use this relatively niche issue as a political pressure point to motivate them to go out and vote for Cruz. For people in the ‘Temperamental’ personality group, who tend to dislike commitment, messaging on the issue should take the line that showing your ID to vote is ‘as easy as buying a case of beer’. Whereas the right message for people in the ‘Stoic Traditionalist’ group, who have strongly held conventional views, is that showing your ID in order to vote is simply part of the privilege of living in a democracy.”

However, by September 2016 Senator Cruz had lost the Republican Party nomination, and was out of the race for the Presidency. Nevertheless, at the end of his presentation Nix demurely hinted that Cambridge Analytica had been employed by a different Presidential hopeful. He neglected to reveal who exactly he was referring to, but we now know that it was none other than Donald Trump.

In exchange, Trump’s campaign was armed with a mobile app called Groundgame, which identified in real-time the political views and personality types of every voting-aged inhabitant in a home visited by canvassers. It allowed them to only approach residents that were rated as being receptive to Trump’s message. Moreover, it provided canvassers with conversation guidelines tailored specifically to their personality profiles. Finally, the app was constantly being updated with feedback from canvassers, who fed resident reactions back into the app, and that data was used to improve and refine the database.

This same app was used by Brexit campaign staff.

In addition to Groundgame, Trump’s campaign also utilized Cambridge Analytica’s ability to send targeted political messages online. As a result, boasts Nix, “pretty much every message that Trump put out was data-driven.” Throughout his campaign, Trump’s team tested about 175,000 different variants of the same ad, fine-tuning minor details like colours, captions, headings, and major details like background photos or videos, in order to cater to very small groups. These messages were distributed through Facebook using so-called “dark posts,” sponsored newsfeed-style ads, paid for by the Trump campaign, that were only visible to users with specific personality profiles.

Trump’s campaign used 40-50,000 different types of adverts every day, constantly measured the responses, and adapted their tactics based on those responses. They could focus on particular locations as small as a 5-mile radius, enabling them to target specific categories of people.

In addition, Cambridge Analytica was able to get immediate feedback on the effectiveness of these ads. For example, if a person clicked on an ad that attacks a political candidate, they would see more ads of a similar nature. If they ignored the ad, the automated script would try a different headline, or focus on another personality trait more suited to that individual. Based on these responses, Cambridge Analytica was able to identify which of Trump’s messages was gaining traction, and more importantly, where. This directly influenced the campaign travel schedule.

Facebook dark posts were also used to lower voter turnout among key groups of traditionally Democrat voters. In a New York Times editorial, Mckenzie Funk, a well-respected author and journalist, specified that dark posts were used to try to suppress the African-American vote. The Trump campaign sent ads reminding voters of Clinton’s infamous “super predator” line, and also sent ads to Miami’s community of Haitians, reminding them of the Clinton Foundation’s actions in Haiti after the earthquake in 2010.

These Facebook dark posts are dangerous to democracy because they are only visible to those being targeted by these ads, and there is no way for a legislative body to track their content. As a result, there is no SEC oversight, and no chance for public scrutiny of these attack ads. It is theoretically possible for a political campaign, in the week before an election, to spend anywhere from $10-100 million on a series of dark posts that specifically target users in swing districts, and no one would know.

“These companies,” says Martin Moore, director of King’s College Centre for the Study of Media, Communication and Power, “have found a way of transgressing 150 years of legislation that we’ve developed to make elections fair and open.”

This is Part Three of a four-part series detailing the rise of a new type of propaganda machine; one tailored to fit a modern, inter-connected, and technologically dependent society. Part Four will discuss the role of AI, botnets, and alt-right inspired “fake news” websites that operate in tandem with Cambridge Analytica’s propaganda machine.