The prominence of scandal

On 12 July, after only 12 days in office, Mak Chai-kwong, Hong Kong’s Secretary of Development, was arrested by the city’s Independent Commission Against Corruption (ICAC). Mak’s arrest, and immediate resignation, was due to a row over civil servant housing allowances that stretches back two decades. Mak and a senior official, Tsang King-man, supposedly cross-rented their adjacent apartments in order to claim housing allowances from the government in the 1980s. Such actions are a violation of the Prevention of Bribery Ordinance. The ICAC has begun a full investigation in conjunction with the Department of Justice. Mak has denied all wrongdoing, stating, “[he] [has] followed regulation and [does not] think the matter involves [his] personal integrity.”

Despite this claim, it is evident that this controversy is a significant blow to the newly installed administration of C.Y. Leung, Hong Kong’s new Chief Executive. For Leung, his first fortnight in office has been anything but smooth. The day he was sworn in to office by Chinese President Hu Jintao, which also marked the 15th anniversary of Hong Kong’s return to China from British rule, precipitated large pro-democracy street demonstrations.

Hong Kong, a Special Administrative Region, runs according to the idea of “one country, two systems,” which effectively allows the city to operate as a separate city-state with its own constitution (“Basic Law”), political and legal system and currency. Beijing, however, pulls the strings in terms of choosing the Chief Executive through the effectively appointed Election Committee of 1,200 prominent citizens.

Many Hong Kongers, supported by pro-democracy members of the Legislative Council, are calling for the direct election of the Chief Executive by 2017, which Beijing promised in 2007. However, Leung’s problems extend beyond electoral legitimacy. In addition to the housing scandal, it was recently revealed that certain extensions made to Leung’s home purportedly did not receive the required permits. This issue holds much importance because revelation of Leung’s electoral rival Henry Tang’s illegal home structures during the Chief Executive campaign was a key reason for Tang’s loss in March. As a result, Leung is facing public calls to resign while a legal proceeding against his election to office, brought about by pro-democracy legislator Albert Ho, has commenced.

Hong Kong is by no means unfamiliar to scandals amongst their public officials. Earlier this year, then-Chief Executive Donald Tsang was discovered to have used the private jets of business tycoons without charge and was photographed dining on a yacht. Most importantly, Tsang was found to have planned to rent an upscale penthouse in Shenzhen from a Chinese media tycoon for well below market price, allegedly in exchange for granting a broadcasting licence. The ICAC is now investigating Tsang’s affairs.

One question that arises in the general environment of public controversy and outrage is: to what extent Hong Kong is a democracy? Under the terms of “one country, two systems,” it is often difficult to pinpoint exactly where the division lies between country and system. In government, Beijing’s direct influence is obvious. The de facto appointment of the city’s leader is perhaps the best example. As Henry Tang, the former “heir-apparent” lost favour, the sudden mass switch of support that gave Leung momentum in the Election Committee undoubtedly mirrored Beijing’s desires. Also, the public fears that when universal suffrage comes in 2017, China will bar unfriendly candidates from running through the Election Committee. Fixed elections are the greatest indication of “one country” dominating “two systems.” 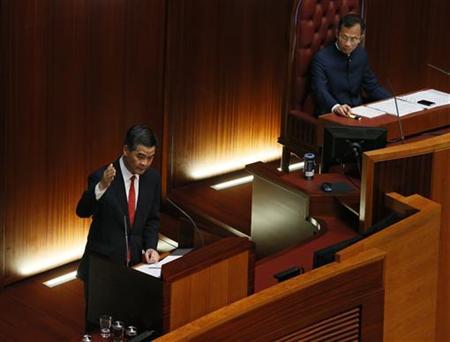 Hong Kong Chief Executive C.Y. Leung making a point in the Legislative Council chamber. Hong Kong will hold its legislative elections this September, where 35 members will be directly elected while 30 will be elected by industries and labour unions

Yet, the many democratic features of Hong Kong juxtapose the authoritarian ones. Freedom of the press is guaranteed in Article 27 of Hong Kong’s Basic Law, with rampant and passionate debates over many subjects. In politics, while 30 legislators are chosen by industry and organized labour, in the 2012 elections, the electorate will directly choose the other 35. A vivacious multi-party system plays a crucial role in legislation. Much of the opposition against Leung ironically comes from the pro-Beijing and pro-business Liberal Party, which hopes to exploit the administration’s unpopularity for gains in the fall elections. A large majority of local councillors are directly elected and only a small minority are appointed by the central administration.

The future of democracy

The future of democracy in Hong Kong is dependent on much more than the pro-Beijing, pro-democracy conflict. As the world’s financial centre, according to the World Economic Forum, political developments in Hong Kong cannot escape international attention. Therefore, China faces a dilemma in dealing with Hong Kong’s future. If it attempts more central control from Zhongnanhai, it will be a blatant extension of authoritarian, anti-democratic power over a proto-democratic society. This move would likely meet Western hostility given Hong Kong’s economic significance.

Should China continue to allow Hong Kong to further flourish into a democratic society, this would only undermine the Chinese Communist Party’s central authority, rousing the insecurities of a government that dreads the consequences of popular protest among its titanic populace. Beijing spends more on internal security than on external defence, signalling where its fears lay.

China and Hong Kong will remain separate societies until 2047, 50 years after the 1997 handover. What happens after will be determined in the next few decades.

Given the Communist Party’s need for unshakable legitimacy, it is hard to foresee a fully democratic Hong Kong in the Western model. For now, both the Chinese and Hong Kong administrations will continue to tread a fine line between “one country” and “two systems.” Nevertheless, one variable that should not be ignored are the people of Hong Kong. A recent poll by the University of Hong Kong showed than since the 1997 handover, only 37% of the public are proud to be Chinese citizens, the lowest figure since 2001.  This, along with public outrage over a planned textbook praising the efficiency of China’s one-party rule while criticizing the squabbles of the American system demonstrates that eradicating the democratic desires of Hong Kong will be a formidable challenge. Whatever the future holds for Hong Kong, the dialectic between one country and two systems cannot be reconciled without considering the city’s tradition of economic and political freedom.