The Egyptian Army has faced a wave of political and civil unrest since it ousted Ex-President Morsy. The forces presumably acted in response to the widespread demonstrations against him, and gave a voice to the hundreds of thousands who protested the Morsy’s failure to keep electoral promises. However, that has not shielded it from international criticism or internal consequences, especially after last week’s violence.

After the deposition, the army appointed Adly Mansour, head of the country’s Supreme Constitutional Court, as interim president. It was a move that seemed to address the protestors’ demands for increased rule of law and impartiality of the constitution; something they saw endangered under Morsy after the 2012 constitutional referendum. In the presidential statement following the takeover, Defense Minister Abdel-Fattah el-Sisi assured the nation that Mansour would establish a government that is “strong and diverse” and declared that he would have the power to issue constitutional declarations until parliamentary elections can be held. 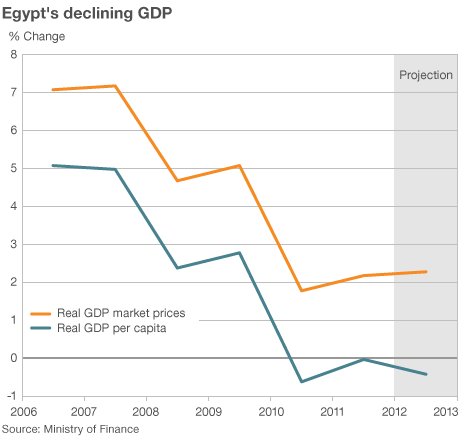 The new army-backed government, shortly after it was instituted, also pledged to make the revitalization of Egypt’s feeble economy the priority. This sounded very appealing to a country facing a $3.2 billion/month deficit, 13% inflation, decreasing real GDP, 12% unemployment rate, an astounding 82% of unemployed youth, as well as rapidly declining infrastructure and failing energy and water services. Mansour and el-Sisi promised financing for the budget, a drive to revive foreign direct investment and infrastructure spending in the form of public-private partnerships.  These were initiatives that, if done well, might have helped the Egyptian economy survive the transition period.

After Morsy’s ouster, el-Sisi declared that the transition period was “too important for maneuvers or hindrances, whatever the justifications*” and that the army would not tolerate “stalling or disruption” of such a complex period. But despite the Defence Minister’s best efforts to simultaneously coax and threaten civilians, particularly Muslim Brotherhood subscribers, to maintain the peace, the clashes have been ruthless.  While the sentiment and apparent commitment to the recovery of the state were perhaps appreciated at the time, these statements took on a new meaning after the events of last week.

After some weeks of relatively minor clashes between the police and pro-Morsy protestors, state forces got progressively more violent. A month passed after the army-backed interim government took power, but the protests did not abate. In fact, the movement was strengthened by the army’s forceful and sometimes lethal treatment of peaceful protestors.

The violence reached a peak on August 14th, 15th, and 16th, when the security forces rolled in with armoured bulldozers, tear gas and gunfire. They quickly dismantled the two sit-in sites where Muslim Brotherhood members and Morsy supporters had gathered for the past month. According to the Ministry of the Interior, there were over 800 killed in the operation and thousands injured as well as over 1000 arrests. The Muslim Brotherhood’s estimate however, differs greatly. They claim over 2000 dead on August 14th alone.

So Much for the Economy:

Morsy’s ousting created a wave of optimism and hope for a more stable economy. Stock indexes rose 7% after the deposition announcement, along with hopes that the stalled billion-dollar loans from both the IMF and the European Union would come through. National investing firms had confidence in the interim government; the National Investor believed that “they [the army-backed government] will know how to deal with institutions, they’ve got a clear agenda financially”. Other analysts were slightly more cautious but still positive with their predictions, saying that there was the opportunity for a more stable government, but it delayed a real chance of economic progress.

The country has a running monthly deficit of $3.2 billion a month, which constitute half of state spending. This clearly creates a serious strain on the country and needs urgent balancing. The problem is that the government, without the legitimacy of popular vote, is unlikely to address any significant or controversial issues, particularly if they include cutting fiscal spending. Public opinion is increasingly negative, so the temporary cabinet is unlikely to risk the unrest that would be unavoidable if it approves significant fiscal cuts, either for welfare or corporate subsidies.

Real economic progress cannot depend on an ever-increasing deficit, even if cutting spending will be an unpopular decision. Any real effort to stabilize the economy must include a slash of industry subsidies. This includes the oil industry, which gets 8% of the country’s GDP in subsidies that keep the fuel price low.

However, in light of the crackdown, the hope of any real focus and tackling of economic concerns vanished. Civil unrest, especially now that the government alienated other factions of civic society as well as the international community, has become the primary issue.

Unwillingness to enact significant economic reforms to balance the budget is exactly why the IMF loam is stalled. The contract includes significant austerity measures that Morsy did not implement, and the interim government seems to be following the same path. Similarly, the EU loan was blocked because of Morsy’s failure to meet democratic reform conditions; it will not be delivered while the country is under martial law.

The Egyptian government can afford to overlook both its deficit and the lack of Western aid because of its wealthy neighbours. Several Arab countries have already pledged aid, even as Western powers threaten to withdraw it. The aid packages, however, come in the form of loans that will eventually have to be repaid. This will only increase Egypt’s already serious deficit and, in the long term, might do more harm than good.  If aid and loans are accepted indiscriminately, the government will only end up mortgaging the country’s future.

Egyptians’ main grievances of state corruption, unemployment, poverty, capital flight and food insecurity stem from an unbalanced and inefficient economy. This means that without legitimately implemented economic reforms, a politically stable state will prove very difficult to achieve. The demonstrations and, hence, the alienation of the civilian society will likely worsen.  Mansour and the army should aim to institute a democratically elected government as soon as possible. Otherwise, the state will spend its time and resources increasing economic uncertainty and trying to subdue their citizens, rather than actually helping the country.

SlutWalk: A Transnational Movement Uniting All Genders Against Sexual Violence, Blame, and Shame.

In his latest article, Carlos Abarca examines the practice of victim blaming and shaming, drawing on efforts to address this worrisome trend by the social movement SlutWalk.