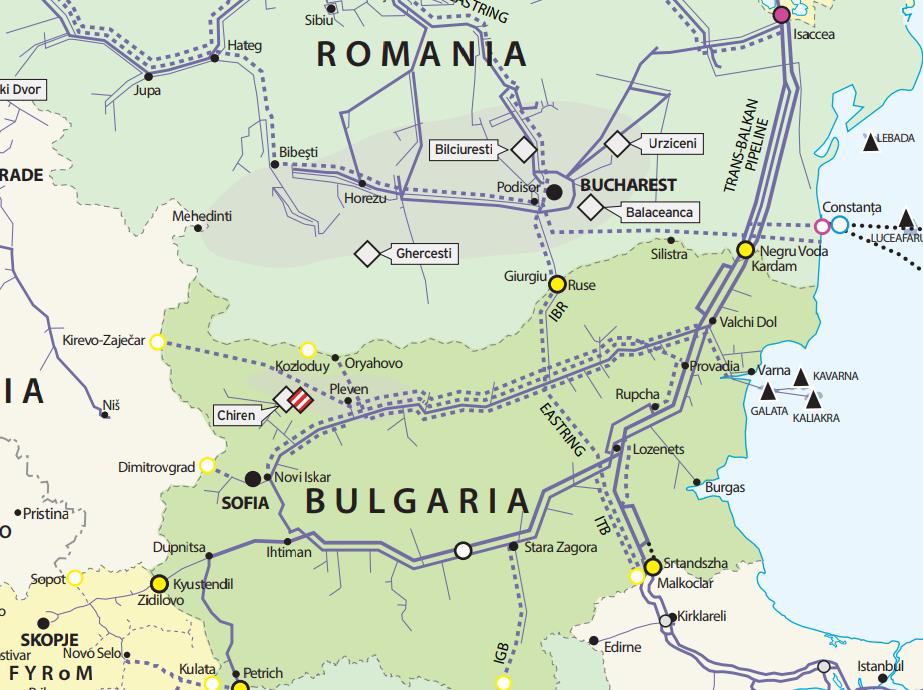 Within the upcoming year the configuration of gas supplies in Eastern Europe is expected to change dramatically as Russian flows will be diverted via the TurkStream corridor and new sources of supply from the Caspian Sea or imported as liquefied natural gas (LNG) will be vying for regional markets.

Yet much of how the new dynamics will shape up will depend on control over a critical section of Bulgarian infrastructure that will dictate whether the country along with its NATO neighbour states, Romania and Turkey, will be able to respond flexibly to potential disruptions.

This article proposes to examine the resilience of Bulgaria, Romania and Turkey by assessing their capacity to transport alternative supplies across backup infrastructure.

When announcing TurkStream in December 2014 Russia, highlighting its strong political and economic ties with Ankara, insisted that it would be a more secure transit route than the current one via Ukraine, which suffered cut-offs of Russian gas in the winters of 2006 and 2009.

Despite that official rhetoric the Russian analyst Dmitri Trenin, a retired colonel from the Soviet Army who became a founding member and is now director of the Carnegie Moscow Center, describes the relationship between the project’s partners, Turkey and Russia, as “schizophrenic”.

Within a year after introducing TurkStream, Moscow suspended talks with Ankara over the project, when Turkey shot down a Russian jet that had allegedly breached its air space. In retaliation, two weeks after that incident at the end of 2015, in winter, Gazprom reduced natural gas exports to the Turkish state and independent importers by a quarter and raised the price of gas to the latter.

This history, illustrating the unpredictability of Russian-Turkish relations, suggests that Russian gas supplies to Turkey via TurkStream are unlikely to escape political maneuvering any more than supplies via Ukraine and the TBP are.

Considering the possible dependence of Bulgarian and Romanian (as well as Turkish) markets on imports via TurkStream, Russia itself may seek to disable flows through this corridor as a means to impair the resilience of NATO’s eastern flank.

In this context can the NATO members’ vulnerability in this region be reduced and, if so, what are the available options?

Although Eastern European countries could have several options to tap alternative sources of gas from the Caspian Sea or imported as LNG, the biggest concern lies in the availability of infrastructure required to ship them across the region.

Russia seeks to divert exports from the existing Trans-Balkan Pipeline (TBP), which connects Ukraine to Turkey to TurkStream1 and 2 In this context, Greece, which is also at the receiving end of a TBP spur could send gas imported from the Caspian region or as LNG back to Eastern Europe being used as an alternative route for diversifying supplies.

Turkey has also doubled its LNG send-out to 110 million cubic metres/day after the import capacity at its onshore terminals was expanded and the government decided to charter two floating storage and regasification units.

Bulgaria has carried out upgrades to TBP in order to allow for reverse flows at the Strandja-Malkcolar interconnection point (IP) on its border with Turkey. Romania expects to build spurs linking its own Black Sea offshore gas, if and when developed, to the TBP.

As a result, according to one of the regional transmission system operators in discussions with the present author, the TBP could with relatively minor upgrades, establish itself as a bidirectional north-south backbone for non-Russian gas flows linking southern Europe and Turkey to Ukraine, having at present a total capacity of 26.8 bcm/y (of which: 5.4 bcm/y for Bulgaria, 16.6 bcm/y for Turkey and 4.8 bcm/y for Romania).

That non-Russian gas could be sourced by various regional companies from Turkey, Greece and Bulgaria, originating either from the Caspian Sea basin or as imported LNG.

According to Ilian Vassilev of the Bulgarian advisory firm Innovative Energy Solutions, himself a former Bulgarian ambassador to Russia, Gazprom could book 90 percent of the long-term reverse capacity from Turkey, while the remaining 10 percent would be earmarked for short-term capacity.

In December 2018 Bulgaria launched the binding phaseof an open season at the Strandja-Malkoclar IP on the Turkish-Bulgarian border. The total reverse capacityoffered in December from Turkey to Bulgaria via the TBP was 48.4 million cubic metres/day (mcm/d) for a period of 15 years from 1 January 2020 and 33.74mcm/d from Bulgaria to Serbia for 15 years starting from January 2021.

For Gazprom to be able to transport its gas further, into Serbia, via the Bulgarian transit system, it would need to take it up to Lozenets in central Bulgaria and then north to Provadia (near Varna) from where it would merge with a 470-kilometre stretch of  new pipelinebefore travelling west across Bulgaria to Zajecar on the Serbian border.

If Gazprom gains control over this section of the Bulgarian transmission system, the TBP would be blocked. Meanwhile, alternative routes such as the EU-backed Bulgaria-Romania-Hungary-Austria (BRUA) corridor, designed to transport gas from the Black Sea or Caspian Sea or, indeed, imported via Greece or Turkey, might be used for the transport of Russian volumes.

The European Commission has likewise included the Eastring idea on its latest PCI List. This project would bypass Bulgaria’s existing infrastructure by starting from its border with Turkey before heading north to Slovakia via Romania and Hungary. However, it is still at a very early stage, and no works on it have yet begun, so it is unlikely to provide immediate flexibility in case of urgent need.

Although NATO’s eastern members Bulgaria, Romania and Turkey will continue to depend on Russian imports, they may import natural gas from new sources, either from the Caspian Sea basin, for example, or as liquefied natural gas (LNG). These imports could guarantee those countries’ energy resilience in case of curtailments on the TurkStream lines.

Nevertheless, as this analysis has shown, much will depend on whether the three countries can secure access to alternative backup infrastructure.

Efforts made by Turkey in expanding import capacity and by Bulgaria in building new interconnectors with Greece to access more LNG imported via this country indicate that Turkey and Bulgaria may be able to tap alternative supplies, should they experience a critical interruption in Russian imports.

Much more vulnerable will be Romania, which despite boasting the EU’s third largest gas resources, could see its dependence on imports increase if it caps domestically-produced gas prices and introduces an import obligation, as stipulated under an emergency ordinance passed at the end of 2018.

Its resilience would be boosted by access to the TBP. However, if Gazprom gains control over the Strandja-Provadia section of the Bulgarian transmission system, then that segment of TBP would be blocked and Romania would no longer be able to tap future volumes imported into Bulgaria from Greece and Turkey.

Aura Sabadus earned her doctorate at King’s College London with a thesis on the impact of international pressures for reform, and of constraints arising from Russian energy security considerations on the liberalization of the Turkish natural gas sector. She is a senior journalist specializing in Eastern European and Turkish gas markets and a research associate of the London-based European Centre for Energy and Resource Security (EUCERS). She has written for numerous American, British and Turkish publications and also has taught courses on journalism and the deregulation of energy markets at British universities. View all posts by Aura Sabadus →