On March 19, 2003, in a nationally televised address, then-United States President George W. Bush announced the initiation of American military operations in Iraq to “free its people and to defend the world from grave danger.”

More than a decade later, while Saddam Hussein’s authoritarian regime has been successfully overthrown and replaced with a US-style constitutional democracy, foreign intervention in Iraq has not translated into improvements in the lives of its people. The Iraq War, which had amassed 189,000 casualties and a total cost of $2.2 trillion by its formal conclusion in 2011, has also failed to bring an end to the nation’s rampant sectarian violence and failed to establish lasting peace in the region.

Ordinary Iraqis are presently subject to some of the worst living conditions in the world. A 2008 study estimated that close to a quarter of the population existed below the poverty line, while updated 2012 numbers placed unemployment levels at 16%. Iraq`s GDP per capita in 2012 was an estimated $4600, which ranked it the 160th richest among 228 nations surveyed. The vast majority of the population suffers from a lack of access to basic utilities and services; according to the United Nations Development Program (UNDP), the average Iraqi household receives only 14.6 hours of electricity per day, and only 30% have access to the public sanitation network. 20% of the population utilizes unsafe sources of drinking water, which contributes directly to an alarming infant mortality rate of 35 per 1000 births. These conditions have persisted despite the best efforts of foreign governments and humanitarian agencies; the United States government alone has invested over $60 billion in the development of infrastructure and programs to promote economic growth over the last decade, to little avail. In the streets of Baghdad today, it is not uncommon to overhear sentiments that living conditions have actually eroded since the days of Saddam’s rule. 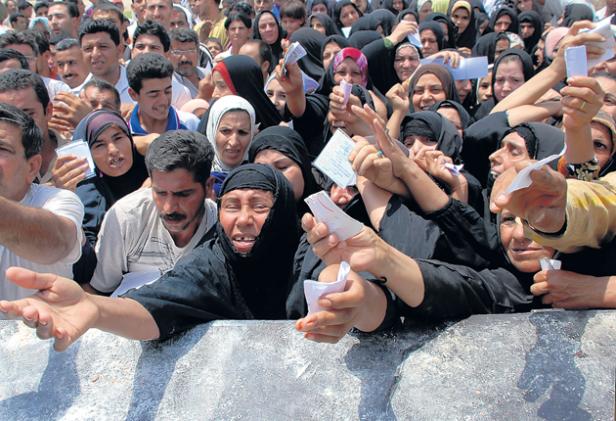 Despite a robust oil-exporting industry, a significant portion of the Iraqi populace continues to live in poverty with inadequate access to basic utilities and sanitation services.

The root cause of Iraq’s infrastructural deficiencies lies not in a lack of financial capital; even if foreign aid is completely disregarded, Iraq is an oil-rich nation that is more than capable of funding domestic development efforts through export of the coveted commodity. The problem lies rather in deeply institutionalized practices of corruption and cronyism that have diverted billions of dollars in funds away from their intended usages. Iraq ranked 175th out of 178 countries on the 2010 Corruption Perceptions Index put forth by Transparency International, coming in ahead of only Afghanistan, Myanmar, and Somalia. Additionally, the UNDP claims that up to 95% of bribery incidents go unreported. This prevalent lack of transparency in governmental functions has resulted in an increasingly unequal distribution of natural resource wealth. The central Iraqi government has taken steps to address this growing issue; in 2010, it partnered up with UNDP and the UN Office on Drugs and Crime (UNODC) to launch a National Anti-Corruption Strategy. This ongoing initiative consists of a series of mandatory workshops for elected officials, religious and community leaders, and local journalists that aims to promote the establishment of an anti-corruption culture. While visible results of the programme have been limited so far, it nevertheless represents an important and necessary step towards the eventual normalization of Iraqi political customs.

While rampant corruption constitutes a major area of concern going forward, it is the region`s ongoing sectarian violence that poses the greatest threat to the preservation of the fledgling Iraqi democracy. Recent months have seen a significant escalation of Sunni-Shiite tensions, and a resurgence of deadly attacks on civilian targets from both sides. The 10th anniversary of the launch of the Iraq War was commemorated in Baghdad with 64 deaths and hundreds of wounded, in a series of bombings in several predominantly Shiite neighbourhoods which the notorious Sunni militant organization al Qaeda was quick to claim responsibility for. May has also been one of the bloodiest months in recent memory, as attacks across the country killed more than 500 people.

Iraqi Prime Minister Nouri al-Maliki, whose increasingly autocratic consolidation of power has been met with growing alarm by members of the nation's Sunni and Kurdish sects.

The spike in violence is reflective of growing discontent with the actions of Iraqi Prime Minister Nouri al-Maliki, who was elected into office twice in 2006 and 2010 but has since sought to consolidate political power in an increasingly autocratic manner. In addition to being leader of the governing Shiite faction, al-Maliki now also holds the positions of defence minister, acting interior minister, acting head of intelligence, and chief of the armed forces. This has understandably been met with growing alarm by members of Iraq’s Sunni and Kurdish sects, who fear that the establishment of a Shiite dictator will result in their inevitable marginalization and persecution. In this sense, Iraq’s internal turmoil has also served as a microcosm of the ongoing international rivalry between Shiite-dominated Iran and Sunni Saudi Arabia. Ironically, the nation’s post-war push for democratic governance may have been the single biggest contributing factor to its present ideological divide, as the election of a Shiite majority allowed for the insinuation of a strong Iranian influence on a traditional Arabian ally.

With the passing of the decennial of Bush’s infamous “Mission Accomplished” speech earlier this month, lasting peace and security remains a frustratingly elusive goal for the Iraqi people. Barring a diplomatic reversal of miraculous proportions, the nation appears fated to serve as a proxy battleground for an all-out sectarian conflict that will determine the geopolitical future of the Middle East.