Living in Vietnam, I often find the topic of the country’s troubled relationship with China entering into conversation. Beijing’s maritime aggression is a very real concern for Vietnam, and with the recent 35th anniversary of the Sino-Vietnamese war, China remains the chief bogeyman in the collective Vietnamese consciousness.  I find myself amazed, however, at the (sometimes outlandish) vitriol that otherwise progressive friends  reserve for their northern neighbour- Chinese companies exporting poisoned watermelons to Hanoi being among the most absurd claims. Despite having been a French colony, ravaged by the United States, and torn apart by a twenty-year civil war, most Vietnamese still hold China to be the nation’s perennial enemy. Amid a backdrop of deteriorating regional security, the origins of this animosity bear closer examination.

In theory, China and Vietnam should have remained close allies. They share similar political systems as two among a handful of remaining communist states, and both were forged in brutal Cold War-era civil wars. Much as the Vietnamese hate to admit it, the two share deep cultural ties stretching millennia. Vietnam’s pre-colonial history is defined in large part by its relationship with China, namely its nearly thousand-year cycle of rule and rebellion against various Chinese dynasties. Contemporary animosity can be traced to the Sino-Soviet split in 1968. China showered North Vietnam with support during the wars with France and the United States, but much to Beijing’s ire, the USSR emerged as Hanoi’s patron of choice. To counter-balance Soviet influence in Southeast Asia, Beijing armed Cambodia’s ultra-Maoist Khmer Rouge (KR). North Vietnam and the KR had cooperated against the American military, but brutal cross-border raids and the slaughter of ethnic Vietnamese in Cambodia led Vietnam to launch an invasion of Cambodia in December 1978. The Vietnam People’s Army’s (VPA) rapid advance led to the overthrow of the Khmer Rouge and (inadvertently) ended the Cambodian Genocide.

Beijing wasted little time in responding: some 200,000 Chinese People’s Liberation Army (PLA) troops poured into northern Vietnam in 1979, capturing northern provincial capitals. Though the PLA held a numerical advantage, the VPA was armed with decades of war-fighting experience and the latest Soviet military technology. Hesitant to commit to conventional warfare, the Vietnamese held the bulk of its regular forces in Hanoi and Cambodia and instead reverted to the tried and true tactics of irregular warfare. Some 30,000 died on both sides over the course of the month-long conflict. While both sides claimed victory, Hanoi’s ability to blunt the Chinese on both its northern and southwestern flanks thwarted Beijing’s strategic aim of forcing the VPA out of Cambodia.

Unsurprisingly, the contemporary angle to these strained ties are two sets of disputed islets in the South China Sea – the Spratly 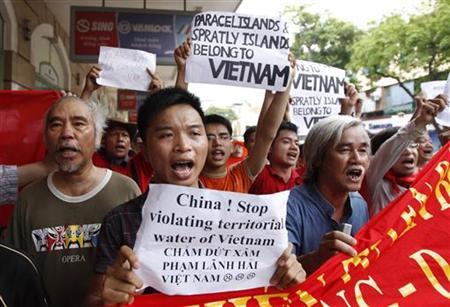 and Paracel Islands. Ownership over the tiny Paracel islands has been in dispute for decades, having continually switched hands among the French, Chinese, and South Vietnamese armed forces. This culminated in a January 1974 clash between China and South Vietnam with the PLA Navy emerging victorious. China’s hold on the Paracels proved to be a sticking point, as it refused to hand control of the islands to Hanoi even after the reunification of Vietnam in 1975.

The Spratly island dispute is multi-faceted, involving the islands’ partial occupation by China, Malaysia, the Philippines, Taiwan and Vietnam. Hanoi claims the islands have been Vietnamese territory since the 16th century, until their invasion by Chinese forces. Chinese sources hold that the islands were discovered by the Han dynasty in 2 BC. The deadliest clash over the islands occurred in 1988, when Chinese gunboats sank a Vietnamese landing craft and killed 64 soldiers.

The dangerous game of maritime brinkmanship with China occurs with an alarming regularity. In January, Chinese state-run CCTV4 released a documentary detailing a June 2007 incident near the Paracel islands, in which Vietnamese naval ships attempted to block vessels from the China National Petroleum Corporation from surveying the disputed waters. Vessels from the China Marine Surveillance (CMS) – China’s agency of choice for maritime disputes – responded with a series of dangerous ramming maneuvers on direct orders from CMS high command.

China remains Vietnam’s largest trading partner, but ties between the two aren’t likely to improve drastically. The shifting balance of power in the Asia-Pacific has seen Vietnam inch cautiously towards Washington, while its neighbours have welcomed the US with rather open arms. Bilateral ties between Washington and Hanoi have steadily improved since the 1995 rapprochement, but Hanoi has avoided explicitly embracing its former enemy out of fear of inflaming its northern neighbour. The Vietnamese government has taken active steps to root out anti-China demonstrations, including a recent incident in February, which saw anti-China demonstrations in Hanoi’s centre dispersed by, oddly enough, government-paid ballroom dancers and aerobic instructors. The Vietnamese political establishment may privately support such views, but economic considerations force a clamp down on any public manifestation of this deep-seated antipathy.

The outlook of this relationship isn’t entirely gloomy. A recent meeting between Chinese Premier Li Keqiang and the Chair of the Central Committee of the Vietnamese Fatherland Front, Nguyen Thien, Nhan led to declarations of joint cooperation, including on the high seas. VPA chief Vo Van Tuan recently called for the establishment of a direct hotline with his Chinese counterpart. These are a bright spots in an increasingly troubled relationship, but only if both parties move beyond mere statements. Should Hanoi and Beijing manage to develop a mechanism to manage their maritime disputes, it could serve as a model for China’s other territorial issues in the South China Sea.

You Could Have Just Asked Nicely: Analyzing the Effectiveness of Torture

Andrew Majoran analyzes the effectiveness of torture as an interrogation method.

How Legitimate is Ukraine’s New Government?