Turkey has often been cited as a success story in the Middle East, both in terms of the quality of its democratic institutions and its economic development. The country is noted for its robust and growing economy, popular tourist attractions, and its well-developed civil society. However, the latest manifestations held in Taksim Square have escalated from minor protests over the plans to build on Istanbul’s Gezi Park to countrywide demonstrations against Prime Minister Recep Tayyip Erdoğan’s government. The critics and protesters of the ruling Justice and Development Party (AKP) allege that the Prime Minister is enacting a program of creeping authoritarianism and Islamization. Furthermore, reports indicate that strident police tactics have injured hundreds of protesters.

In an interview earlier this year, President Abdullah Gül echoed the notion of “the Turkish model” of a democratic, moderate, Muslim state. However, one questions the extent and state of Turkey’s democracy in light of the weak institutional checks and balances, the heavy-handed treatment of dissent, and the numerous grievances of the critics of Erdoğan’s regime. The civil unrest that has mushroomed since May 31, 2013, has tarnished the façade of a peaceful, democratic oasis in an otherwise volatile region. The violent manifestations and the harsh response of the Turkish authorities necessitate a reevaluation of this widely held characterization.

The clashes between the protesters and authorities are illustrative of deeply ingrained and historic cleavages within the country along political, regional, religious, and socioeconomic lines.

Under Prime Minister Erdoğan, Turkey has continued to play a crucial role in NATO operations, especially in Afghanistan, and initiated accession talks with the EU. Turkey’s army is the largest in NATO after that of the United States, and its geopolitical position as a pivot between Europe and the Middle East makes it a strategic concern for the Alliance. However, Erdoğan has left his hallmark on the direction of Turkish foreign and domestic policy.

In a break from Turkey’s republican diplomatic history, Erdoğan attempted to cultivate better relations with states such as Iran, Iraq, and Syria, emulating the role that the Ottoman Empire occupied in the region before 1923. However, recent Turkish diplomacy in the Middle East has yielded mixed results. Turkey faces the serious challenges of balancing Teheran and the breakdown of ties with Syria following Assad’s progressively bloody clamp down on his opposition. Indeed, Erdoğan stands among the most vocal of the opponents of the Assad regime. However, his support of Sunni rebels in northeastern Syria has damaged Turkey’s image among the Shi’ite Muslims of the region. Regardless of how one assesses Turkey’s Ostpolitik, one can undoubtedly discern a shift in priorities toward cultivating soft power in the region not seen since the collapse of the Ottoman Empire. 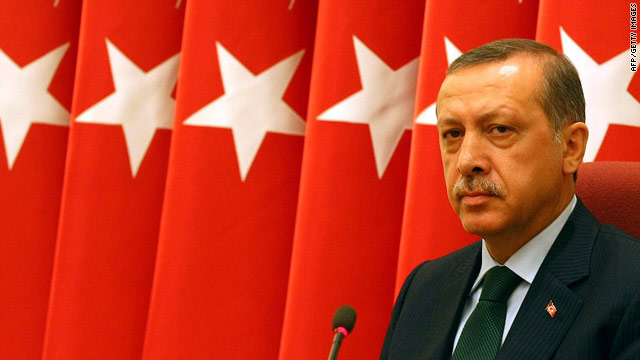 Prime Minister Erdoğan's government faces criticism and dissent from protesters in many parts of Turkey.

Prime Minister Erdoğan’s domestic policy is marked by a decidedly sympathetic stance toward Islam and religion in public life in Turkey – a highly contentious issue in the country. The AKP relies on the support of the Anatolian, rural, and conservative elements of Turkish society. Erdoğan’s government has made progress in terms of respecting the rights of minorities, such as the Kurds, and has successfully negotiated a ceasefire with the Kurdistan Workers’ Party (PKK). Observers also note that the AK government’s policies have increased religious freedom, allowed for successful economic development and expanded foreign direct investment in the country. Finally, the Prime Minister’s policies have curbed the undemocratic role of the military in Turkey’s political establishment. The democratically mandated AKP majority in parliament has been active in enacting their socially conservative and neoliberal economic programme.

Mr. Erdoğan’s critics can cite a long catalogue of abuses against the state’s constitutional secularism, which has been guaranteed by the military since the founding of the republic under Atatürk in 1923. For instance, Erdoğan’s government been accused of intimidating journalists, passing laws restricting alcohol consumption and banning public displays of affection, and has even handed down a suspended sentence to Turkish pianist, Fazil Say, for insulting Islam via Twitter. For all the praise that has been showered upon Turkey as a model for democracy in the Middle East, the country has the unsavoury distinction on Freedom House’s list of states with the largest number of incarcerated journalists, ahead of even China and Iran.

During his tenure, Erdoğan has effectively curtailed the power of the military and smeared its image. On Sunday, the Prime Minister confirmed that the Atatürk Cultural Centre would be demolished to make way for an opera house and a mosque. Critics and secular Turks maintain that the government’s policies are distancing Turkey from the West and promoting the unprecedented influence of Islam in the public sphere and in the shaping of public policy.

After six days of tumult, the clouds of tear gas have yet to subside. Even though superficial points of commonality are present, one must exercise caution before making sweeping predictions of an “Arab spring” style development in Turkey, for the context there is substantially different. The difference is that Erdoğan is a legitimate, democratically elected leader with a strong base of support.

As a troubled democracy with a population divided along a number of salient lines, Turkish leaders must strengthen their country’s institutions in order to channel the discordant voices, to address the concerns of the opposition, and to allow for peaceful dissent. On the other hand, the state must maintain order and engage in the complex task of sifting out those with legitimate grievances from hooligans among the mass of demonstrators. The protests have been detrimental to Turkey’s international standing and illustrate that Turkish society is highly polarized along political, religious, and socioeconomic lines. How Erdoğan responds to his opponents will no doubt decide the course of Turkey’s idiosyncratic and turbulent democracy.