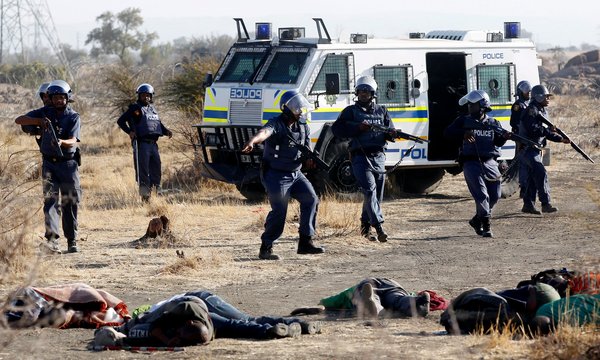 South African police officers move out after opening fire on a crowd of striking miners at the Lonmin Platinum Mine near Johannesburg on August 16.

An attempt by South African police on Thursday to disperse 3,000 striking miners at Lonmin Plc’s Marikana Platinum Mine near Rustenberg has left at least 34 dead and 78 wounded.  Although conflicting reports about the precipitating events abound, it would appear that after tear gas, barbed wire and rubber bullets failed to break up the mob, police resorted to live ammunition after being fired upon by a miner with a shotgun.

The shooting was only the latest incident in a string of recent protests as South Africans become more and more impatient with high levels of unemployment, (reaching over 30% in some provinces with unofficial numbers certainly higher), deepening poverty, and gross socio-economic inequalities. There were great expectations for improvements to the lives of the poor immediately following the end of apartheid, now a full 18 years ago, but for far too many, few things have changed in that span.

Reminiscent of apartheid-era police brutality and drawing comparisons to the 1960 Sharpeville and 1976 Soweto massacres, the shootings will only serve to drive a wedge between the governing African National Congress (ANC) and the people, as it becomes increasingly out of touch with the needs of the poor. The ANC holds its leadership conference at Mangaung (Bloemfontein) in December and if the protests continue apace a swift exit may be in the works for current ANC leader and South African President, Jacob Zuma.

In response to the violence and to shore up continued international investment President Zuma stated that, “These events are not what we want to see or what we want to become accustomed to in a democracy that is bound by rule of law.”

When Resource Wealth Fails to Reach the Worker

The current strike began on August 10 when thousands of workers left their jobs demanding a wage increase from R5000 to R125000 per month; equivalent to roughly CAD $600 to $1300. Ten others including two police officers have already died in strike-related violence. The mining sector is one of the worst remunerated in South Africa and miners say their working conditions have improved little during almost 20 years of democracy.

The striking miners belong to a new union, the Association of Mine Workers and Construction Union which had broken away from the National Union of Mineworkers (NUM), one of South Africa’s largest and with strong links to the ANC. The new labour union believes that NUM has become too close to big business and no longer represents the best interests of its members citing poor wages despite rising profits.

British-owned Lonmin Plc, the world’s third largest producer of platinum, has been forced to shut down production and as a result stock prices have fallen 18% since the labour strife began. South Africa, home to an estimated 80% of global platinum reserves, has suffered through the recent 5% decline in platinum prices which have been affected by falling automotive sales. A highly labour intensive resource, platinum is a necessary component in the manufacture of car exhausts.

As large international mining companies’ profits continue their overall rise with heightened demand for commodities, mining strikes in South Africa are significant globally as mine workers across the developing world are typically underpaid and overworked with very poor working conditions.

In an inflammatory nod to the spreading influence of populism across the South African political spectrum, in June, President Zuma attempted to draw down criticism of the ANC’s handling of the economy by claiming that despite the return to democracy it was still largely controlled by ‘white males.’

In Concert with Service delivery Violence

While strikes in South Africa are commonplace, the Lonmin strike comes on top of a series of service provision protests—attacking the poor provisions of water, electricity, and refuse removal—in poor areas (townships) in Western Cape province. These protests are often seen as evidence that delivery of basic services has failed and the government’s approach needs to be improved, but is this really true?

It is actually the areas with the highest levels of service delivery—Gauteng and Western Cape provinces also have the greatest number of protests. Analysts speculate that this is a result of a system of clientelism, where local patrons appropriate goods and services in exchange for political support, an arrangement the ANC has been accused of benefiting from. Not surprisingly, the only non-ANC provincial government, the Democratic Alliance (DA) of Western Cape has faced considerable challenges in implementing more rational, politically disconnected methods of service delivery in township areas as a direct consequence of hitting up against this entrenched system of political patronage.

Storm Clouds over the Rainbow Nation?

Formally a global beacon of inclusive and progressive political development, politicians in post-apartheid South Africa have been accused of squandering the legacy of Nelson Mandela and his once glorious ANC. For all of South Africa’s immense potential the actions of a few corrupt elites can all too easily alter the entire nation’s course for the worse. Barring an outright change of government at elections, the emergence of a credible national opposition party to challenge the uncontested rule of the ANC is essential. The closest contender, the DA, has struggled to achieve sizable gains outside of the Western Cape. To be successful the DA must further disassociate itself from its links to white-minority rule and establish an electoral base in poorer areas where the ANC remains supreme through a broad-based education campaign aimed at stymying the blind allegiance many South Africans still have for the party which brought majority rule in 1994.

An immediate solution to the miners’ strike would be a wage hike through a negotiated settlement with Lonmin Plc. However, longer term preventative strategies are numerous and could include the nationalisation of South African natural resources as lobbied for by many within the ANC. Tellingly, the pace of change in South Africa is slow and patience for promised reforms that simply never come is ebbing low. All eyes will be locked on the ANC leadership conference in December which will for better or worse chart South Africa’s course for the next five years.